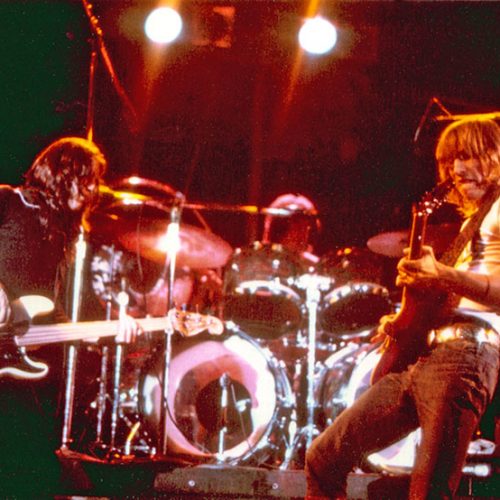 Barnstorm in concert circa 1973

Tired of the James Gang’s musical format, Joe Walsh moved to Colorado to begin the next chapter, forming Barnstorm with Joe Vitale and Kenny Passarelli.

Joe Walsh built a considerable reputation as lead guitarist and lead vocalist for the Cleveland-based James Gang. Such tunes as “Funk #49, “Tend My Garden,” “Walk Away” and “The Bomber” brought wide popularity and endless touring, and, as the big bucks beckoned, Walsh turned the other way. In 1971, encouraged by his friend and producer Bill Szymczyk, Walsh made the difficult decision to relocate to the open air of Colorado’s Boulder County. He formed a new group called Barnstorm with drummer Joe Vitale, a former Kent State classmate, and Colorado bassist Kenny Passarelli. Barnstorm was the first album ever recorded at the legendary Caribou Ranch studio near Nederland. Walsh freely indulged himself with beautiful choruses, country tinges and pastoral pop hooks on “Mother Says,” “Here We Go” and “Turn to Stone.” Accompanied once again by Passarelli and Vitale, Walsh officially went solo the following year with his second album, The Smoker You Drink, The Player You Get. The first Top 10 album of Walsh’s career, it went on to sell more than a million copies. “Rocky Mountain Way,” co-written by Passarelli and inspired by Walsh’s move to Colorado, opened up a massive audience for Walsh and his band. Barnstorm disbanded amicably in 1975, allowing Walsh to produce Dan Fogelberg’s Souvenirs album. So What, his third solo album, included “Welcome to the Club” and a remake of “Turn to Stone.” At the end of 1975, the Eagles drafted their old friend to join them; Walsh’s tenure with the popular West Coast country-rock quintet gave him enhanced visibility, and he continued his pattern of successful solo albums.