Denver’s Tumbleweed Records was a small independent label co-owned by Bill Szymczyk, whose first major success had come when he convinced blues legend B.B. King to cut contemporary-sounding albums. The result was King’s first major pop crossover, “The Thrill Is Gone,” a hit in 1971. The producer went on to have great success in the 1970s, both as an A&R man and behind the board, signing and producing the James Gang.

“I decided to leave Los Angeles after a big earthquake,” Szymczyk recalled. “A few of us record-company people had bandied about the idea of starting our own label. Back in the early ‘70s, you’d get two hit records and you could do that.”

Tumbleweed Records was based out of a funky old house just east of downtown Denver on Gilpin Street, with Szymczyk running the show.

“Gulf + Western owned Famous Music, which bankrolled us,” Szymczyk said. “The reason we went to Denver was that my partner Larry Ray’s wife was from there. I had visited two times for a total of six days, but each time, I had an incredibly good time! Colorado was happening in a lot of ways back then.”

“Everything was self-contained in that house,” guitarist and vocalist Danny Holien said of Tumbleweed. “They had a lot of money behind them. Most of it was blown partying and having a big time. That’s what it takes to make money—spend a lot of money to impress a lot of people. But I saw the inner workings and didn’t care for it too much. Nice people, but I thought everyone was trying to be big time. Boy, did they spend a lot of money.”

Tumbleweed released some very good albums featuring expensive covers. Holien grew up in Cannon Falls, Minnesota. He came to Colorado and wrote songs that moved Tumbleweed to produce Danny Holien in 1972. The album came housed in a luxurious die-cut jacket with a 16-page songbook.

“It was the first bunch of songs I’d written, for the most part. I was naïve and green. It was a fluke. I’m not that aggressive of a self-promoter, but I just happened to meet a person who introduced me to Bill Szymczyk. I sat down and played a couple of songs for him acoustically, and he slapped his knee and said, ‘Hot damn, let’s do an album.’ I said okay. It was that funny.”

Holien’s music was that of a poet, not a philosopher. “I don’t want people to hear what I have to say,” he said at the time. “I want them to hear what I’m saying.”

Holien almost hit with a single called “Colorado,” a quiet protest against the rape of the land. Very popular on FM stations, “Colorado” reached No. 66 on the Billboard charts on September 9, 1972.

“I hate to be a protest singer. Things just come up. In Denver, I was in a house a block from the busy intersection of Colorado Boulevard and Colfax Avenue. I wrote it in a few minutes one day, a feeling—it’s a nice little tune. ‘Colorado’ did better in Northern California—Salinas, Monterey—than it did in Denver. I was not very well known in Denver. I was playing around the fringes.”

Holien and Steve Swenson played on Chief, the solo album by Dewey Terry (of Don & Dewey fame), on Tumbleweed. Holien didn’t want to tour, so Swenson teamed up with Don DeBacker from 60,000,000 Buffalo, Dan McCorison and others and formed Dusty Drapes & the Dusters—in essence, Boulder’s first alt-country band.

But Tumbleweed was short-lived. The label folded in 1973.

“We lacked for nothing,” Szymczyk said. “The Gulf + Western corporate structure went along with it for the first year, anyway, until we ran through a million and a half dollars—a lot of bucks back then!”

When the Eagles wanted a more rock ‘n’ roll sound, they hired Szymczyk, and the unprecedented chart success of the 1974 On the Border and 1975 One of These Nights albums made both parties millions. 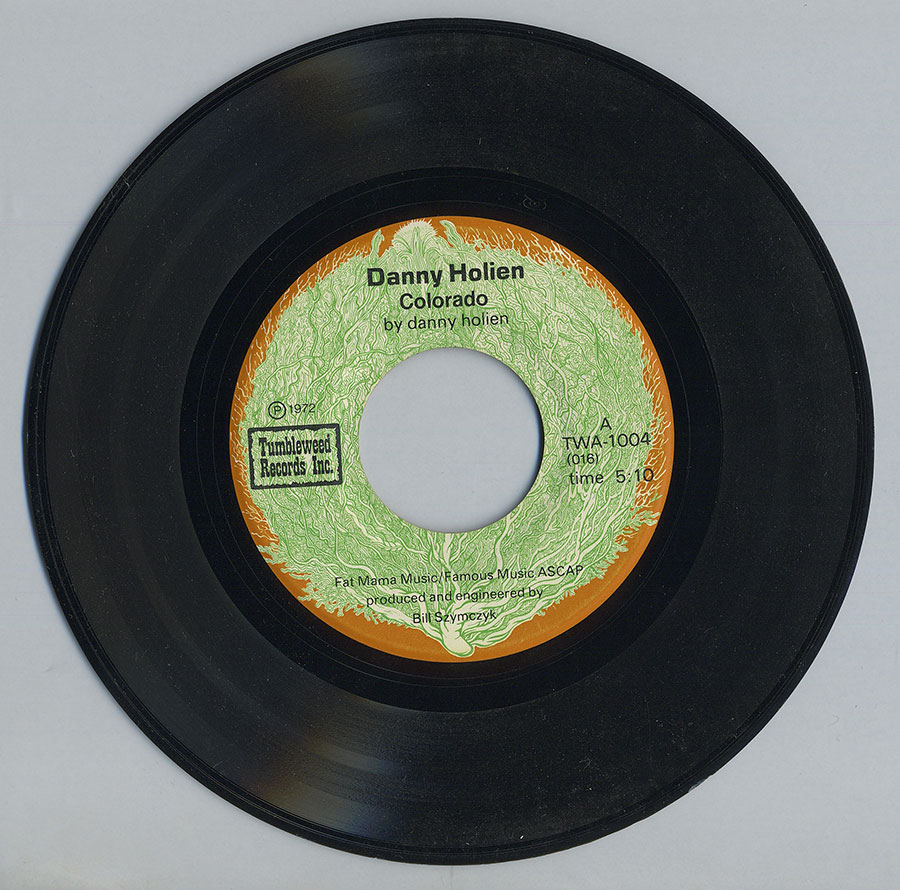