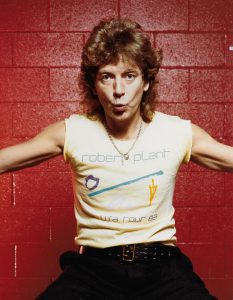 On September 12, 1999, ZZ Top was the last band to play at Denver’s McNichols Sports Arena, one last hurrah before the venue’s demise (it was demolished to make way for the Denver Broncos’ new stadium). When it came down, I hoped they would find my hearing—I lost it somewhere at McNichols. Of the 400-plus rock concerts held there, I attended the majority as rock scribe for The Denver Post.

Truthfully, my fondest memories are of sports, not music—I’ll reminisce about a David Thompson dunk or a Joe Sakic slap shot more than the three times I sat through a Styx gig. But as a concertgoer, I thought McNichols was a state-of-the-art facility compared to its predecessor, the Denver Coliseum, home of the Stock Show (“That band stinks!” “It’s not the band!”). In chronological order, one man’s ten most memorable shows at McNichols, may it rest in peace.

Elvis Presley, April 23, 1976: I tell young people that I was once in the same room with the King. Okay, so the room was McNichols, with 18,000 of my closest friends. What’s your point?

ZZ Top, August 1, 1976: ZZ Top was also one of the first rock bands to open McNichols, on August 27, 1975, but it was the following year’s multimedia trek—“ZZ Top’s Worldwide Texas Tour”—that was renowned for excess. The band’s driving blues-rock was presented from a Texas-shaped stage along with $140,000 of Texas livestock, including live buffalo, longhorn steers, buzzards and rattlesnakes—75 tons of equipment! It became one of the largest-grossing live tours of the decade, over $10 million (that figure seems quaint now).

Cheap Trick, January 15, 1978: At the time, I thought In Color was the greatest power-pop album ever made (I still do), and I was determined to see Cheap Trick open for Kansas at McNichols Arena. The problem? It was the day of Super Bowl XII, my Denver Broncos vs. the Dallas Cowboys. I agreed to meet the band an hour before kickoff at a Holiday Inn coffee shop on East Colfax. I wondered how I would recognize the group in an everyday setting—on the album cover, guitarist Rick Nielsen looked like a demonic geek, and drummer Bun E. Carlos could have passed for a chain-smoking war criminal on the lam. I walked into the coffee shop. The place was empty, save for two elderly ladies having tea…and the members of Cheap Trick, looking just like they did on In Color. Awesome. That night, the band rocked McNichols, even though the crowd was somber after a Broncos loss. We became friendly after that. At McNichols in 1979, during a guitar solo, Nielsen yelled my name instead of the anticipated “Hello, Denver!” The kids cheered anyway. In 1981, the guys let me shake maracas with a bunch of radio contest winners during an encore. What, and get out of show business?

Heart, September 1, 1980: I fancy myself a Colorado rock historian, and I can only cite a few examples where a rock band recorded live at McNichols. Heart’s then-current album Bebe Le Strange provided the main portion of the group’s set, but an encore medley of “I’m Down” and “Long Tall Sally” found Jock Bartley of Firefall sitting in on guitar. And Ann Wilson belted out an outstanding version of “Unchained Melody.” That performance was included on Heart’s next album, Greatest Hits/Live, a double-record set of remixed greatest hits as well as six live tracks. But collectors have to track down the original vinyl version—when Greatest Hits/Live was reissued on one CD, “Unchained Melody” was edited out.

Genesis, January 17, 1984: In the late ’70s, I saw stage designs of truly monstrous proportions, from Kiss’ bombs, flashpots and confetti to Blue Oyster Cult’s $200,000 laser show to Electric Light Orchestra’s outrageous spaceship stage (it took a crew of 50 people 10 hours to set the whole thing up). Queen’s concert in 1982 raised the bar. The setup had four huge multifunctional spotlight pods and three massive louvered racks containing scores of aircraft landing lights. The equipment (five tons worth) was suspended from the ceiling in a semicircle over the sides and back of the stage. In addition, there were a few tons of equipment on stage, including risers and prance platforms sporting still more aircraft landing lights. Yikes! But for eye-gouging spectacle, no one topped Genesis. The rock group had funded the development of Vari-Lites, a revolutionary concept in stage lighting. As manufactured by the Showco company out of Dallas, each Vari-Lite was computer controlled—preprogrammed for positioning on the stage, the size of the spot, and color of the light. The few bands that had utilized Vari-Lites to that point did so mostly for special effects. The Police took 30 of them on the road. David Bowie used 40 on his 1983 jaunt. But for their McNichols show, Phil Collins and Genesis had designed a rig that held 200 of the Vari-Lite units. The resulting visuals were as stunning as anything offered up in rock concert history.

U2, November 7 & 8, 1987: U2’s motion picture Rattle and Hum, a documentary of the Irish band’s 1987 world tour, featured live recordings from concerts at McNichols. During the first show, the band battled the distracting presence of cameramen on stage. Bono eventually dropped his microphone in disgust and muttered, “I feel like a book that shouldn’t have been made into a movie.” But three songs from the second night made the Rattle and Hum soundtrack – “(Pride) In the Name of Love,” “Silver and Gold” and a cover of the Beatles’ “Helter Skelter.”

Def Leppard, February 12 & 13, 1988: To commemorate the 227-date “Hysteria” world tour, Def Leppard filmed a 90-minute concert video at McNichols, In the Round – In Your Face. Initially, the superstar British quintet had planned to film a performance video for the hit single “Pour Some Sugar on Me,” but the members decided to do the whole show, financing the filming themselves, and they wound up with a lot of good footage. The project served as a memorial to their massive high-tech circular stage construction, but the most riveting aspect was the effort put forth by drummer Rick Allen. In a much-publicized incident, he had lost his left arm in an automobile accident during the recording of the Hysteria album. But Allen was determined to continue playing with one arm, and onstage, he unveiled his new drumming style for everyone to see. He fostered a technique where his left foot substituted for his missing limb to go along with a specifically designed Simmons electronic drum kit.

2 Live Crew, October 31, 1990: 2 Live Crew had raised a censorship issue with the use of profanity and sexist lyrics, and the imbroglio led Denver police to threaten a boycott. In the end, hardly anybody cared about the raunchy rap group—fewer than 1,500 people showed up, reportedly the smallest crowd in McNichols concert history. Broncos running back Melvin Bratton was there with some of his teammates—he was raised in the same Miami neighborhood as 2 Live Crew leader Luther Campbell—and they sang and danced on stage.

Peter Gabriel, July 27, 1993: For his area fans, the McNichols concert ended a 23-year wait to see Gabriel—he had never performed in Denver as a member of Genesis or as a solo artist, save for his guest appearance on the 1986 Amnesty International “Conspiracy of Hope” tour. The vast stage structure was more than 120 feet long. Two full stages represented antipodean worlds. One was square—the home of the male, the urban and water. One was round—the female, the organic and fire. Both were connected by a conveyor belt that transported Gabriel and his band back and forth. Gabriel rose onto the square stage in an old-fashioned London phone box. At the end of the set, the conveyor belt was filled with luggage. Gabriel packed his band into a suitcase (yes!) and “departed”—a dome floating over the round stage descended and enveloped him. Brilliant.

The Grateful Dead, November 29-December 1, 1994: I always respected the Dead, but I wasn’t a Deadhead until the band’s last McNichols performance, when “permanent part-time” member Bruce Hornsby let me sit on stage right behind his piano. I witnessed the improvisational bent of the Dead up close and personal when guitarist Jerry Garcia and Hornsby started playing off each other. “Captain Trips” was riffing in his trademark circular style, and Hornsby’s eyes were pinned—he looked like he was taking down a message that Garcia was reciting to him. That was a great moment, and Hornsby is still the man. Don’t you love a happy ending?