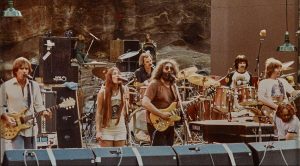 With the Grateful Dead’s first-ever performances at Red Rocks Amphitheatre in 1978, the band and Red Rocks Amphitheatre started becoming synonymous. The Dead considered the outdoor venue “a sacred place,” likening it to Stonehenge and the pyramids of Egypt. The band was scheduled to play four days in 1978, but in two shifts (July 7 and 8 plus August 30 and 31). The Dead used Red Rocks as an instrument of sorts to take Deadheads to places they’d never been.

“We played better,” venerable guitarist Jerry Garcia explained. “It’s a cumulative thing as we adapt to the environment. The realities of touring keep you from playing more than one-nighters in a different venue every night. At Red Rocks, we played several nights in one place. It gave us fine tuning possibilities that we couldn’t do before, and the live show is what we really do.”

“I was awestruck by the place when I walked in,” rhythm guitarist Bob Weir added. “You can use all the ‘power’ you can get up there, because you’re basically gasping for air if you’re singing, or playing a horn—you just don’t get a lot of air to work with up there.”

A young Bill Walton had just won his first NBA Most Valuable Player award a month earlier; he hung backstage on crutches. A rare performance of “Werewolves of London” concluded the July 8 show; both the July 7 and 8 shows were released in 2016 among other performances as July 1989: The Complete Recordings. The band returned for the two August shows, brandishing new songs that would appear on Shakedown Street. 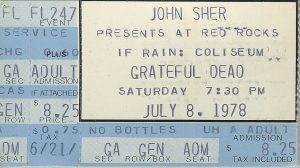 For the Grateful Dead’s 1979 shows, the band’s inimitable community of fans was in full force in and around Morrison. As soon as a Kris Kristofferson concert let out on a Saturday night, Deadheads began trying to camp at the park for their Sunday night festivities, the first of the Dead’s three-night stand. Police and park personnel spent Saturday night chasing as many as 2,000 illegal campers from the grounds; folks partied and did the windowpane dance around the bonfire at Chief Hosa campground. On Sunday, at least 200 people without tickets also tried to sneak in, which resulted in one man falling 35 feet to his death while trying to climb the rock behind the stage area. All the while, thunderheads lit up in the distance behind the stage.

“It will stand out until the day I die,” drummer Mickey Hart said. “You couldn’t see more than 20 feet into the audience. The front row was up to its waist in water because the drains had backed up. The rain and wind were coming at us perpendicular, whipping off of the cymbals. I saw Bill Walton and he took off his giant raincoat to dance. If you stopped playing, you died! It was so awesome to play against that awesome force of nature. You had to give it up to the moment. It was so much larger than the music.”

With new keyboard player Brent Mydland in tow, the shows featured new songs from Go to Heaven and medleys of “China Cat Sunflower”>”I Know You Rider” and “Estimated Prophet”>”Eyes of the World.” It rained the following two days, and the second and third nights of the run were moved to McNichols Arena.