Special thanks to Mark Brown, Will Guercio, Henry Diltz and Teresa Taylor 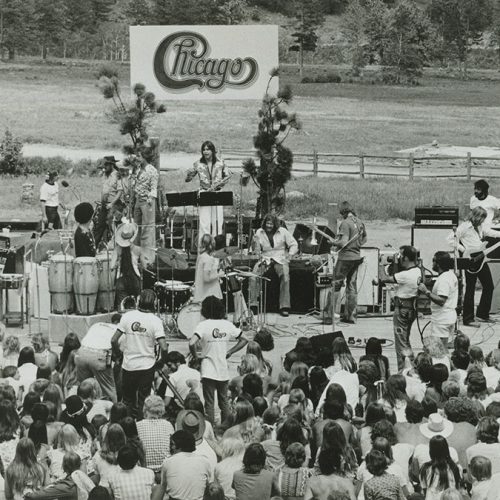 Chicago shooting the TV special "Meanwhile, Back on the Ranch" on location at Caribou Ranch in 1974

Throughout the 1970s and early 1980s, top recording stars headed for Caribou Ranch, the legendary recording complex near Nederland, Colorado.

James William Guercio became a staff producer for Columbia Records circa 1968 and began working with Blood, Sweat & Tears and Chicago. He gathered up enough money to buy the Caribou Ranch property for a reported $1 million in 1971, giving his studio designer a mandate to make the big barn there the world’s best recording facility. Guercio then transformed the place into an opulent retreat for pop music’s aristocracy while developing an exclusive image for himself. During the ranch’s glory days, an entourage got full use of the facilities for a basic rate of $1,500 a day, and record companies were only too willing to shell out the money during their boom years. A veritable who’s who of rock music’s elite passed through Caribou Ranch’s gates, including such legends as Chicago, the Beach Boys, Stephen Stills, Billy Joel, Frank Zappa, John Lennon, Michael Jackson and Earth, Wind & Fire. Caribou gained additional prominence when Elton John recorded three albums there, including 1974’s gratefully titled Caribou. The studio was the main lure, but the lodging was equally seductive. A staff of friendly cooks remained on call 24 hours a day to prepare any snack or meal that came to mind. To while away the off-hours, there was a comprehensive library of movies and games, an antique pool table, horseback riding and ski-mobiling. Comfortably insulated from the usual rock ‘n’ roll circus, artists didn’t have to send for food, commute to and from a hotel or even worry about the laundry. Caribou was in operation until the control room suffered extensive fire damage in March 1985.