Parker forged his love of musical theater, a hallmark of the franchise, as a teenager with the Evergreen Players, a venerable mountain community theater 30 miles west of Denver. He was a 14-year-old chorus boy in The Best Little Whorehouse in Texas and helped build the set for Little Shop of Horrors. “When I was a kid, to me, the Evergreen Players were the big time,” Parker said. There, he hung out with other theater geeks on the fringe of the in-crowd. He played piano, was president of the choir counsel and played Danny Zuko in Evergreen High School’s Grease. Stone went to Heritage High in Littleton.

After meeting at the University of Colorado in 1992, Stone and Parker were outsiders in what was then a largely avant-garde film school. “We were kind of looked down on in Boulder,” Parker said, “because everyone was doing these crazy exploratory kinds of things, and Matt and I just basically wanted to do Monty Python.”

Stone and Parker made an animated short entitled “The Spirit of Christmas,” created by animating pieces of cut-out construction paper with stop motion. In 1995, after seeing the film, a Fox executive hired the pair to make a personal video Christmas card; the duo developed “Jesus vs. Santa.” Out of that came South Park, created for Comedy Central, which debuted in August 1997.

Consistently earning the highest ratings of any basic cable program, the ongoing narrative revolved around four children—Stan, Kyle, Cartman and Kenny—and their bizarre adventures in and around the fictional and titular Colorado town, also home to an assortment of frequent characters such as students, families, elementary school staff, and other various residents.

Isaac Hayes voiced the character of Chef, a black, amorous soul-singing elementary-school cafeteria worker. One of the few adults the boys consistently trusted, Chef made conversational points in the form of original songs written by Parker and performed by Hayes in the same sexually suggestive R&B style he had utilized during his own career. The band DVDA, which consisted of Parker and Stone, along with show staff members Bruce Howell and D.A. Young, would perform the music for these compositions, listed as “Chef’s band” in the closing credits.

“When we first approached Isaac to do the show, I don’t think he was in the best financial shape,” Stone said. “I think he did the voice for the first time for the cash, to tell you the truth. But he got into it after a while.”

The song “Chocolate Salty Balls (P.S. I Love You)” was released as a single in the U.K. in 1998 to support Chef Aid: The South Park Album (a compilation of original songs from the show, characters performing cover songs, and tracks performed by guest artists) and became a No. 1 hit. It also reached No. 1 on the Irish singles chart and peaked in Australia at #14 in February 1999.

The song’s first and second verses featured Chef listing the ingredients of the titular confection, and urged people to “suck on them” during the chorus. During the final verse, Chef, concerned that his chocolate salty balls had become burned, insisted his lover to blow on them. The radio version featured an additional verse, in which Chef begs his lover to retire with him to his bedroom before her husband came home.

“When I did ‘Chocolate Salty Balls,’ I asked them, ‘Are you sure you want to do this stuff, man?’” Hayes remembered. “But then I looked into the studio and saw the whole crew in there cracking up. I said, ‘Shit, they might have something.’ So I went on and did it, and I’m glad I did, because it was such a huge hit.”

Hayes left the show in early 2006, and the character of Chef was killed off in the season 10 premiere, “The Return of Chef.”

“He was never offended by anything we did in the slightest until we did the thing about Scientology,” Stone said, referring to an episode lampooning Tom Cruise and other disciples of L. Ron Hubbard. (Hayes was a Scientologist.)

Following the early success of the series, the feature length musical film South Park: Bigger, Longer & Uncut had a widespread theatrical release in June 1999. The songs were written by Parker and composed by Marc Shaiman. In “Blame Canada,” which satirized scapegoating, the fictional parents of South Park decided to blame Canada for the trouble their children have been getting into since watching the Canadian-made fictional movie Terrance and Phillip: Asses of Fire and imitating what they saw and heard in the movie. “Blame Canada” was nominated for the Academy Award for Best Song. That created controversy, because all nominated songs are traditionally performed during the Oscar broadcast, but the song contained the word “fuck,” which the FCC prohibits using prime time broadcasts. Comedian Robin Williams performed the song with a chorus who gasped when the word was to be sung (Williams turned around at the crucial moment, and did not actually sing it). The Academy Award was instead awarded to Phil Collins’ song “You’ll Be in My Heart,” which was parodied on an episode of South Park in 2000 as “You’ll Be in Me.”

When Stone and Parker premiered their religious satire musical The Book of Mormon on Broadway in spring 2011, it became an instant hit, grossing more than $200 million. When it was announced the show would go off-Broadway in 2012, tickets became nearly impossible to obtain. The Book of Mormon garnered nine Tony Awards, one of which was for Best Musical, and the Grammy Award for Best Musical Theater album. An original Broadway cast recording was released in May 2011 and became the highest-charting Broadway cast album in more than four decades, reaching #3 on the Billboard charts. 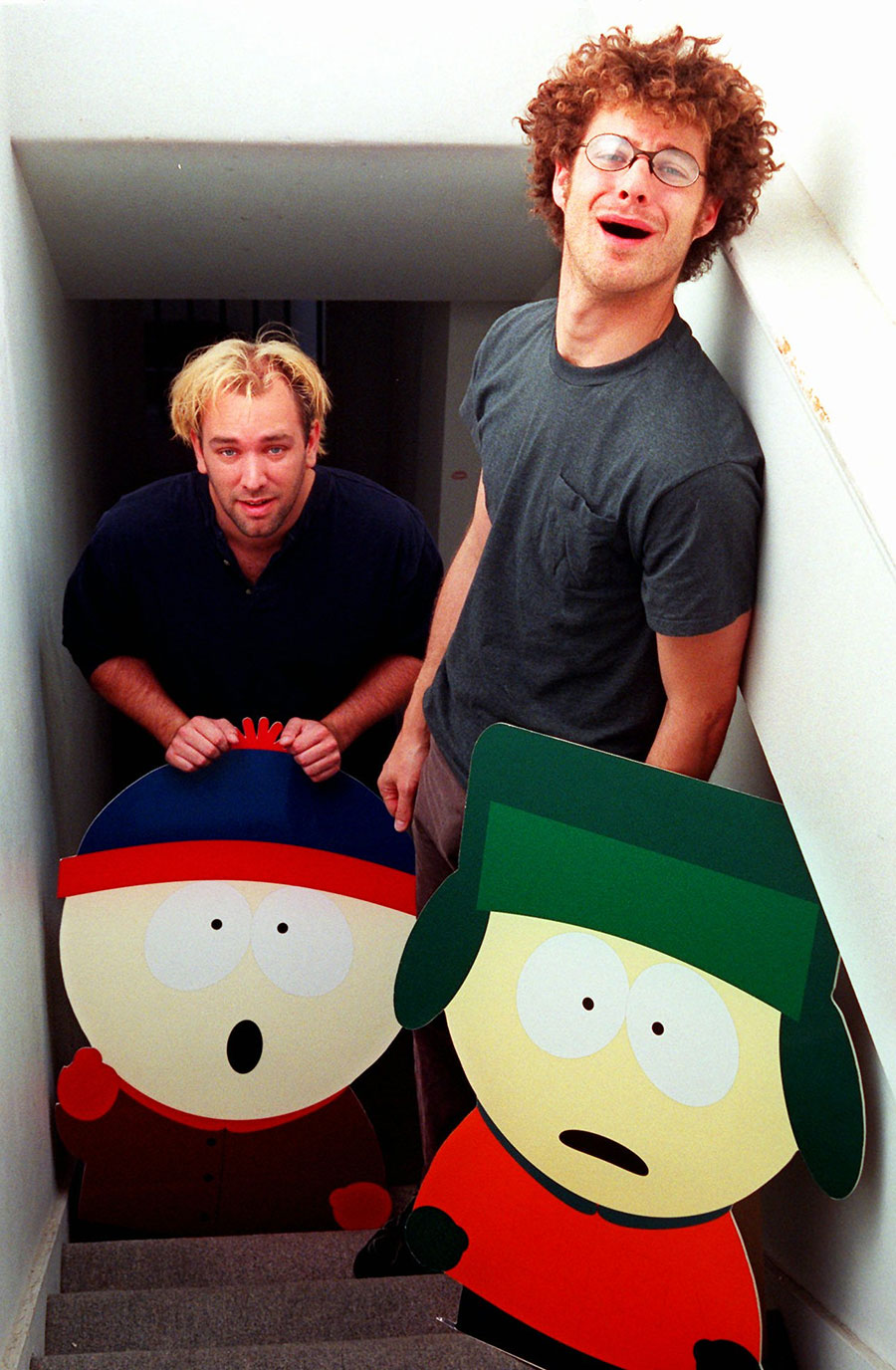