When Peter, Paul & Mary’s 1963 recording of Bob Dylan’s “Blowin’ in the Wind” became an unofficial civil rights anthem, the identification of the folkies with the politics of progress was cemented. Though the music industry continued trying to capitalize on the folk boom, the music’s implicit and explicit politics made many major corporations nervous, and a lot of effort went into developing purveyors of well-scrubbed folk-pop like the Serendipity Singers and the New Christy Minstrels.

“It was a period when the commercial folk music scene happened,” Bryan Sennett of the Serendipity Singers said. “Folk music, of course, had been around forever. It still is. But that was the big commercial era for it.”

The Serendipity Singers, organized at the University of Colorado, were one of the most popular ensembles to emerge. Sennett and Brooks Hatch worked in the Harlin Trio, organized at the Delta Tau Delta house. When Sennett was inspired to expand the group, they recruited another trio of Delts, the Mark III—John Madden, Jon Arbenz and Mike Brovsky—and two other CU students, Bob Young and Lynne Weintraub. The group, then called the Newport Singers, proved popular in Denver through stage performances and radio commercials. They created a unique sound with the use of several guitars, banjos, bass fiddles and drums. Virtually everyone also sang.

“We should have put it together earlier,” Sennett said. “I had signed the Newport Singers with William Morris while we were still in Colorado. Seven of us borrowed $1,500 and we took it all to New York in the summer of ’63, hoping to land a recording contract.”

Expanding again with the addition of Texas-born folksingers Diane Decker and Tommy Tiemann, the nonet performed at the Bitter End, one of the top clubs in Greenwich Village, and gained the management expertise of its owner, Fred Weintraub.

“We changed our name and that’s where we got started,” Sennett said. “We were at the Bitter End night and day the first two months with a musical director. It was my last go-round by that time. I thought, ‘If something doesn’t happen, I’m going to law school.’”

Billing themselves as the Serendipity Singers, they passed an audition to alternate as the headline act on Hootenanny, the weekly ABC-TV folk music showcase taped at different college campuses, the audience consisting of students. Shows ran for a half-hour on Saturday night and featured four acts. Hootenanny was the network’s second-rated program for a while. Many of America’s most important and popular folk-singers initiated a boycott when ABC announced that it would not allow performers associated with “radical causes” to appear on its program.

“The whole college concert business grew up around folk music, where you sat there and listened, and Hootenanny helped that explode,” Sennett said. “It was a more rustic form of music, but it became more show business. It was a hard thing to do a remote broadcast from some college facility—technology wasn’t as great, and there would be mishaps. But it was right in the thick of when folk music was popular. We were real fortunate to be on it.”

Signed to the Philips label, the Serendipity Singers reached the national Top 10 with “Don’t Let the Rain Come Down (Crooked Little Man)”—#6 in February 1964, written by Ersel Hickey of “Bluebirds Over the Mountain” fame.

“Before that, it had been a traditional English nursery rhyme.  We played with it and added things.”

“It was banned in Boston, which always seemed to be the first place to take a song off. Some televisions shows asked us to do something different. Understandably so—it was dangerous, trying to do that if you took it literally. Obviously, it was a statement about adults not listening to children,” Sennett said. “We did a bigger variety of music—the folk center was there, but we were doing Broadway things. We were trying to do a different sound. We mixed it up a lot. We were fortunate that we had a very visual act, a lot of talk and blackouts along with it—everybody had some theater background.

“The main thing was instrumentation. People had all done different things—classical, jazz—and they brought all that together. A lot of times, folk music was new to a lot of people. When they first heard it, they would say, ‘You’re country & western!’ The background of that music was interesting, and we did a lot of adaption and arrangements of traditional things, to the point of not being recognizable sometimes.”

“There was a huge amount of variety television, and that was a big, big boost, especially if you were fortunate enough to get started,” Sennett said. “We played to millions. We were also pretty active politically. We did barbeques all over the country with young Democrats in ’64. Hey, it was the 1960s.”

The Serendipity Singers’ upbeat, massed vocal sound broke on the charts just as the continued impact of the Beatles and the British Invasion was about to sweep the music landscape. New member Patti Davis succeeded Lynne Weintraub, and the group performed at the White House with President Lyndon B. Johnson in attendance. The last original members had moved on by 1970; the name was sold and the Serendipity Singers continued with new lineups as a concert attraction into the 1990s. 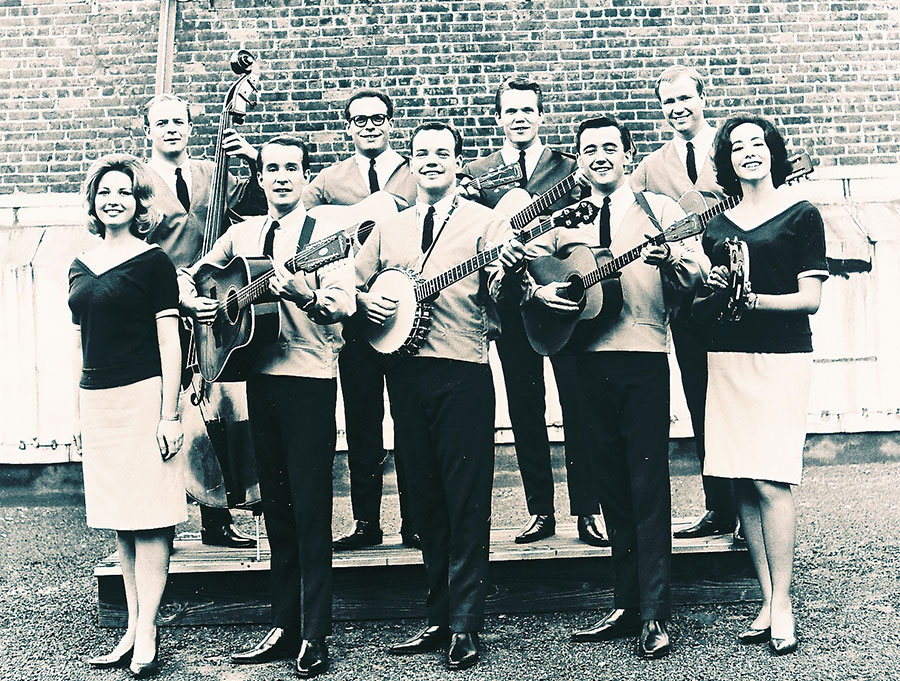