No Colorado band has had a more astounding trajectory into rock’s galaxy of stars than the Fray. In two years, the affable group of churchmates went from playing gigs for mostly friends and family to commanding international attention, becoming one of the most successful and visible acts Colorado had ever produced.

In the early 2000s, singer Isaac Slade was a student at the University of Colorado-Denver, working as a barista at Starbucks.

“When I was ready to jump into college, my parents were trying to convince me that I should not follow my dad’s footsteps and go into engineering, that I should really do music because they saw it made me come alive,” Slade said. “And I was telling them, ‘I don’t know if it’s a smart idea, I need a backup plan…’ I saw that CU Denver offered music business courses. I got a combination degree of business, studio and performance.”

Although he couldn’t have known it at the time, the seeds for what would become the Fray had been planted before college. He and guitarist Joe King had both attended Faith Christian Academy in Arvada, Colorado, where they rarely spoke to each other.

“I was the math nerd, and he was the soccer player,” Slade explained. “For some reason we both sang in choir. After high school, we lived in the same neighborhood and didn’t even know it.”

During a chance encounter at a local music store, they realized they were kindred spirits. Each had been playing predominantly Christian music, and both wanted to write songs that were less pious and touched more on interpersonal issues. Slade set about peppering his lyrics with secular themes of redemption and hope.

“I had played one show outside of a Christian circle, at my Starbucks,”  Slade recalled. “The customers were complaining to the manager because all my songs were heavy spiritual songs. She came up to me and said, ‘Could you make these less…God-ish?’ I went home and threw away all my songs and tried to write about my life.”

Slade took his new songs to a music conference at Estes Park called Praise in the Rockies. “My buddy got me into an open mic. I said, ‘This song is called “Vienna.”’ The chorus is, ‘There’s really no way to reach me/‘Cause I’m already gone’—it’s about a tragic relationship with a girl I had broken up with. Everybody clapped, and then the three panelists looked at me and sighed, and one of them said, ‘Y’know, Isaac, it’s a good song, but it’s just not true. There really is a way to reach you, and that’s Jesus.’ I thought he was going to start laughing, and he didn’t, and everybody else in the crowd nodded along like that was a good point.

“And in a flash, I felt like a jerk in the confines of the Christian market. There are plenty of good people in it, but the framework was just not working for me. I had to get out as fast as I could and join the regular music scene and stay there for the rest of my life.”

Slade and King eventually picked up drummer Ben Wysocki and guitarist Dave Welsh. “Ironically, they were both in my high school band Ember at certain points,” Slade noted. “We broke up because we sucked—we prayed way more than we practiced.”

Playing sparsely attended gigs along the Front Range, the Fray started earning buzz in a hurry. The crew at Boulder’s Fox Theatre booked the group as a headliner, and the quartet earned Best New Band honors from Denver’s Westword alternative newsweekly in 2004. Area FM station KTCL jumped on the demo of a song called “Cable Car.” In a short time, Epic Records came calling, and the quartet signed a major label deal on stage at the Fox.

“We were either getting the chance of a lifetime or dooming our career with a five-record deal—it was scary,” Slade allowed. “The music business model is in transition, but it’s still a country club, and you have to get membership. We figured that if we kept writing and kept playing and kept recording, somebody was going to hear it and call us. That was the dream.”

“Over My Head (Cable Car)” broke nationally in 2005 and pushed the Fray beyond its Colorado fan base; the piano-driven hook and lofty vocal melody drew comparisons to Coldplay. The single was certified double platinum, selling more than two million digital downloads. Slade wrote the song about a disagreement he had with his brother.

“It’s not what we were fighting about, but that we weren’t talking about it,” Slade explained. “Ideally, hit songs are about things you’ve figured out five years ago—everything’s resolved, the dust has settled, and you can stand up in front of people and look like you have it all together. For us, all the songs that were hitting big were the most vulnerable, least comfortable lyrics that really cut to the bone. But it’s okay to be honest in front of people. It’s what they connect with the most.”

The debut CD, How to Save a Life, peaked at #14 on the Billboard 200 and went on to sell more than two million copies. The melancholy title track tied for a the sixth longest-charting single on Billboard’s Hot 100, became a VH1 staple and was used to promote the ABC TV medical drama Grey’s Anatomy. On the road almost constantly, the Fray was a double Grammy nominee in 2006. Television appearances included The Tonight Show with Jay Leno, The Late Show with David Letterman, Late Night with Conan O’Brien and Late Late Show with Craig Ferguson.

“It never felt like we were one in a million,” Slade said. “We were just trying to navigate the road in front of our car.”

Debuting with so much success caused high expectations for future releases. In 2009, The Fray sold more than 500,000 copies, with the hit “You Found Me” becoming the band’s third single to top two million digital downloads; the band was an opener for a leg of U2’s 360º tour. Scars & Stories, the band’s third studio album, was a departure from its contemplative style, recorded with Grammy-winning producer Brendan O’Brien (known for his rock-oriented work with Bruce Springsteen, Pearl Jam and Rage Against the Machine). 2014’s Helios marked the band’s first time working with fellow Colorado musician Ryan Tedder of OneRepublic, who wrote and produced “Love Don’t Die,” which peaked at #60 on Billboard’s Hot 100 chart.

The Fray weathered a number of storms to create artistically true but commercially viable work.

“I tend to live in the future in my mind,” Slade said. “I hope we have what it takes to be the next stadium band from our generation, but I don’t know if we do, honestly. I wonder if we’re missing something in the pandering to the commercial side, where we’re a little afraid to say no—we as a generation are a little afraid not to play the game. It’s all about focusing on quality and letting that define your success. So whether we’re playing to 300 people or 30,000 people, if the four of us aren’t proud of these songs, it’s going to feel just as soulless as doing karaoke tracks.” 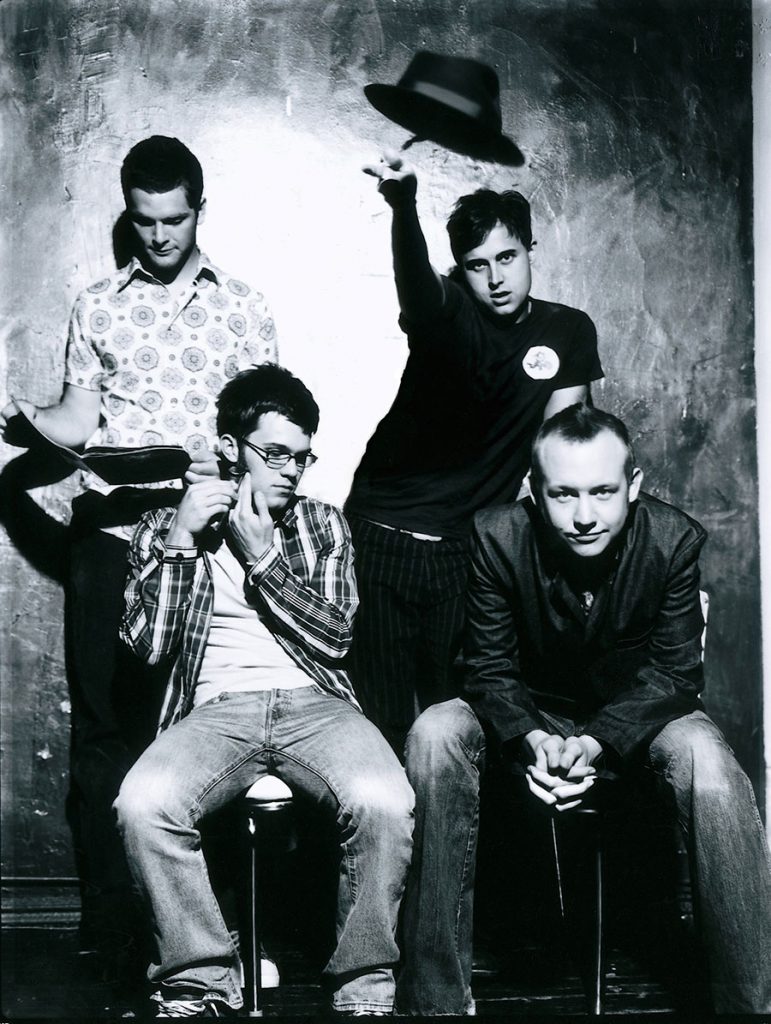