Rose Hill Drive grew up fostering a style of hard-driving classic rock influences—and wound up opening for the Who and Van Halen.

“Jake and I were making music together since elementary school,” Daniel Sproul said. “My dad was always passionate about music, and we got into it just being around electric guitars and a stereo.”

“During high school, we would play every day after classes, and I’d sleep over every weekend so we could jam,” Barnes added.

The boys were blessed with virtuosity beyond their years, and Jake Sproul’s soaring tenor and Daniel Sproul’s searing solos were hailed as a throwback to the heyday of Cream and Led Zeppelin. They found day jobs around town and played as many shows as they could, then headed out on the road, where Rose Hill Drive ascended relatively quickly, performing with the Black Crowes, Wilco, Queens of the Stone Age and Aerosmith, among others, and also at the Bonnaroo, Wakarusa and Austin City Limits music festivals and on the Warped tour.

“The record industry was slowly crashing, and we rode that wave perfectly—it kept us jamming on the road,” Jake Sproul said.

Despite interest from several major labels, there had been no full-length album release. Brendan O’Brien, the producer and creative consultant who had worked with a long list of heavyweights (Pearl Jam, Red Hot Chili Peppers, Bruce Springsteen), signed on to do Rose Hill Drive’s first album after the band played a private showcase. But the members did the unexpected—they shelved the project. With engineer Nick DiDia, Rose Hill Drive went back into the studio and recorded its self-titled debut album, released in 2006 on Megaforce Records. Rose Hill Drive debuted at No. 1 on Billboard’s regional Heatseekers (Mountain) chart for up and coming artists.

While on tour in support of the album, the group played the same stage as the Who at the Hyde Park Calling Festival in London and attracted the attention of legendary guitarist Pete Townshend. Rose Hill Drive supported the Who on select U.S. and European dates, and Townshend invited the band onto his weekly internet talk show called “In The Attic.” The group was named one of the “10 New Artists to Watch” in 2007 in Rolling Stone magazine.

Rose Hill Drive returned to Boulder to write and record a second album, Moon is the New Earth. It positioned the band as an innovator in the revival of traditional blues-rock and psychedelic metal, and the song “Sneak Out” appeared in the popular music video game “Guitar Hero 5.” But the tight-knit trio took a hiatus and almost broke up.

“We’d been in close quarters for ten years together,” Barnes said. “We had a desire to try something new and different. We got to a point where we all needed to go do our own thing for a while.”

The band then added bass player Jimmy Stofer and became a two-guitar quartet, recording a third album in Boulder. Americana fizzled. “It was more keyboard and vocal oriented,” Barnes said. “We’d have changed the name of the band if it wasn’t already established.”

After a fast start, Rose Hill Drive couldn’t hold on.

“I thought that we were going to be the biggest thing ever and people had to recognize it—and it’s just not like that,” Daniel Sproul said. “I don’t think that realization would have been easy when I was eighteen.” 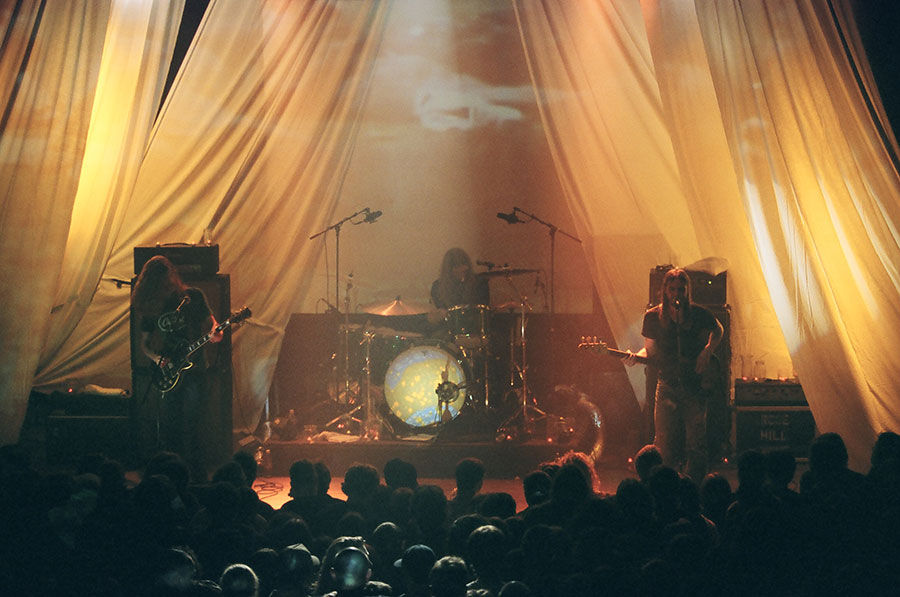