With a modern harmonic sound and imaginative arrangements, Rare Silk emerged as a Grammy-nominated jazz vocal group in the early 1980s.

Originally a female trio consisting of sisters Gaile and Marylynn Gillaspie and Marguerite Juenemann, Rare Silk started out revisiting tunes from the swing era of the late 1930s and early 1940s. At the 1978 inception of KGNU, a community radio station for Boulder, they created a regular public access show.

“We would go in and record three songs every week,” Marylynn Gillaspie said. “And that’s how we built our repertoire, drawing on the vocal styles of the Boswell Sisters and the Andrews Sisters. We wore vintage dresses and built a small following in area clubs.”

The three got their break in 1980 when they met Benny Goodman, “the King of Swing,” opening for him at Macky Auditorium in Boulder; Goodman fell in love with the girls’ tight, precisely harmonized material and asked them to go on his tour. They made their debut with the clarinetist at the Boston Globe Jazz Festival, which was live broadcast on PBS, and

Goodman wanted the trio to sing standards, but Rare Silk was restless. Joined by male vocalist Todd Buffa, the innovative ensemble began modernizing its approach. The echoes of the past were gone; programs now came from stylistic versions of Keith Jarrett and Chick Corea songs.

“We didn’t sound like any other four-part harmony group,” Marylynn Gillaspie said. “Manhattan Transfer, the other leading vocal jazz group at the time, had the standard two men, two women lineup, and they stacked their voices in typical intervals. But we didn’t come from tradition; Todd had his own way of putting harmonies together. He and Marguerite were trained, and Gaile and I had a street sense. That was the magic.”

Rare Silk’s sound was soon heard by a PolyGram A&R exec. The group recorded a debut album with illustrious session players such as Michael and Randy Brecker backing up their vocal performances. New Weave made its way to #2 on Billboard’s Jazz Albums chart, where it stayed for many weeks. It contained a notable version of “Red Clay,” and Buffa was nominated for the Arrangement–Two or More Voices category at the 1984 Grammy Awards; New Weave was nominated for Best Jazz Vocal–Duo or Group category.

Juenemann wanted to pursue more traditional jazz styles; she was replaced by Barbara Reeves, then Jamie Broumas. Rare Silk recorded American Eyes on the Palo Alto label in 1985 and toured perpetually, traveling by van and trailer with its backup musicians. At clubs and musical festivals, the group won over audiences with perfected harmonies, choreographed sequences and a diverse mixture of material.

“We didn’t isolate ourselves in the jazz world,” Marylynn Gillaspie said. “Driving across the country, we all had our Walkmans and headphones, listening to whatever was going on that was good. In the scat singing and improvisational parts of our live shows, we’d incorporate Talking Heads and David Bowie stuff, even go into Culture Club’s ‘I’ll Tumble 4 Ya.’

“We had a good run for ten years, but it got to the point where it was more of a struggle than fun.”

By 1988, Rare Silk had made the decision to disband. 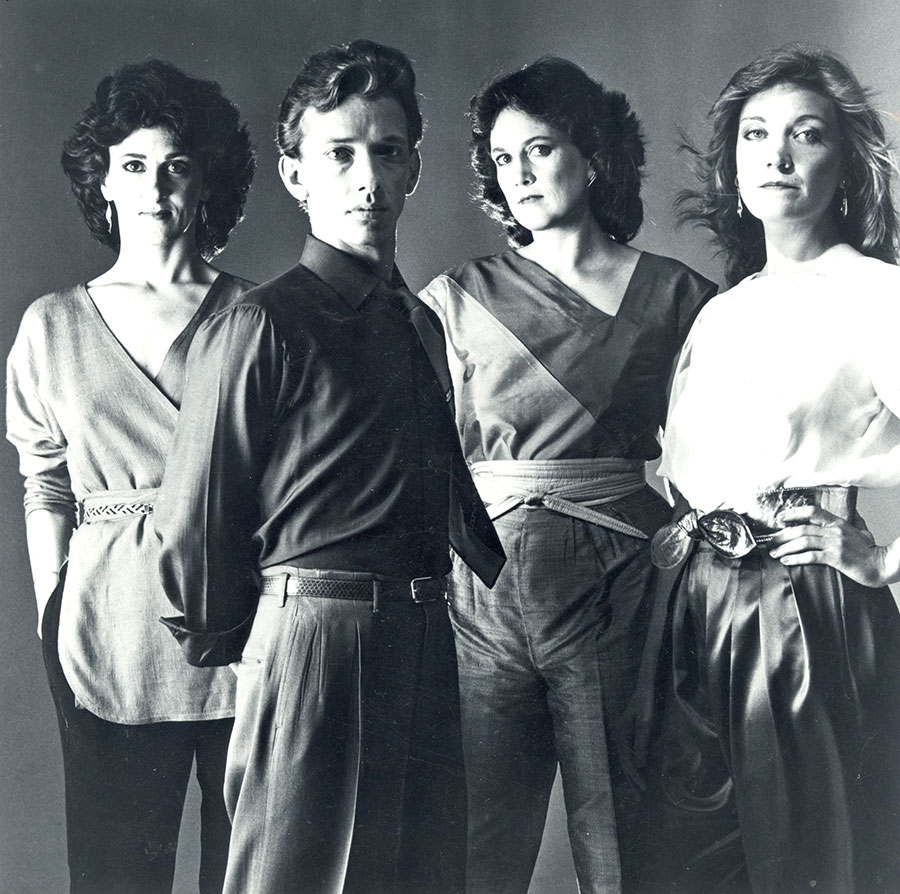