In the music business, the busiest guy of his generation may be Ryan Tedder. The singer-songwriter built a dual career—as frontman for the Denver-based OneRepublic, and as a prolific and visible producer of global hits for other pop music superstars.

“My M.O. is not having one style, but taking a ‘Swiss Army Knife’ approach,” Tedder said. “No matter what fads come and go, you will always find something to bring to the table.”

Growing up in a religious family, Tedder cites his father, Gary, as his earliest musical influence. As a teenager, he had an epiphany that songwriting was the key to a long-term career.

“I was born in Oklahoma, and I bounced between Colorado holidays and every summer, because I had over a dozen family members living there,” Tedder said. “I thought everybody wrote their own songs—why would anybody sing something they didn’t write? Imagine my surprise when I discovered Diane Warren, one of the most prolific songwriters in history. Then I found out Sinatra didn’t write his own songs…

“I thought it was an interesting job. I was watching some crappy pop band on TV one day, and I thought, ‘Man, I can come up with something this good.’ I got my guitar and wrote my first song in two hours.”

In his senior year, Tedder moved to Colorado Springs and became friends with guitarist Zach Filkins at Colorado Springs Christian High School, playing on the soccer team and deciding to start a band. They headed to different colleges; Tedder studied at Oral Roberts University, and Filkins wound up in Illinois.

“I took most of a summer away from college and got an internship at DreamWorks Records in Nashville,” Tedder said. “I asked how long it would take to get a record deal or publishing deal—‘I’ve got two and a half months, so if we could squeeze it in that’d be great’—and they just laughed. But I got my feet wet in Nashville. I learned how to write, working with song doctors. It was boot camp, basically. If you want to truly figure out the craft, that’s the place to be.”

Tedder competed in a singer-songwriter talent search and was selected to perform on MTV. He caught the attention of hip-hop producer Timbaland, who reached out to Tedder a year and a half after the show aired and took him under his wing. Under the alias of Alias, the 21-year-old Tedder started producing tracks.

After two years in studios from New York to Los Angeles to Miami—“like going to college for production”—Tedder’s own artistic aspirations took over. He returned to Colorado Springs and reunited with Filkins. They moved to Los Angeles, joined by guitarist Drew Brown (born and raised in Boulder) and drummer Eddie Fisher, eventually adding Brent Kutzle (bass and cello).

The band faced hard times during its five “minor league” years; the members returned from a performance at Coachella to find themselves dropped from their first record deal. Nonetheless, OneRepublic’s popularity suddenly started to soar on MySpace, the social networking service.

“In May of 2006, there were only two million people on MySpace, but when I switched our status from signed to unsigned, I saw the immediate reaction of people making comments, and it occurred to me—this is our catalyst,” Tedder explained. “I didn’t have the next five years to put flyers under people’s windshield wipers and hang posters on Sunset Boulevard. That crap doesn’t work. We became the No. 1 unsigned band on MySpace. I assigned everybody to take shifts; I was on it eight hours a day, five days a week for a good year and a half, updating and responding. We had every record label coming after us.”

When Timbaland launched his Mosley Music Group label with Interscope, he signed OneRepublic as his first rock act. The original version of “Apologize” appeared on Dreaming Out Loud, the band’s debut album. The remix version, heard on Timbaland Presents: Shock Value, was a massive hit internationally, reaching No. 1 in 16 countries; it reigned as the most popular digital download in history. Tedder had written the breakout single in his dad’s house in Colorado Springs in 2003.

“For the first time ever, a song I wrote hit me the way those massive songs from growing up did, those all-consuming moments of pop coming off the radio when I was 15,” Tedder said. “Every time I listened to the demo, I thought, ‘Maybe I’m self-deluded or biased, but if this isn’t a hit, then I’ll probably never write one, because I don’t know how.’”

In 2009, Tedder was honored by ASCAP for writing and producing the two most played singles in Top 40 radio history, Leona Lewis’ “Bleeding Love” and OneRepublic’s “Apologize.” According to Mediabase, which monitors radio stations in North America, “Apologize” racked up 10,331 spins in its biggest week. OneRepublic’s second single, “Stop and Stare,” also achieved success.

After writing and producing hits for the likes of Beyonce (“Halo”), Kelly Clarkson (“Already Gone”) and Jordin Sparks (“Battlefield”),  Tedder turned his attention back to OneRepublic. Recorded in Denver, the album Waking Up was released in November 2009; the single “All the Right Moves” charted in the Top 10 in several countries and at the #18 spot on the Billboard Hot 100.

“I said, ‘Guys, if we’re going to keep going around the world, we have to camp out in Denver and carve out our own sound,’” Tedder noted. “The first album was Coldplay-like piano-pop. Now you could tell we’re a band that loves Brit-pop, that has a thing for movie soundtracks because we have strings riddled through everything, and that uses hip-hop beats.”

Tedder did his best to make Denver a go-to destination for pop music production, writing hit songs for his band and other artists from the comfort of his private use studio.

“Los Angeles is a wonderful place, and you go there to be a writer and a performer. But then you get out before it destroys you. I’ve seen it happen to a lot of people—you completely lose your sense of self. Seeing the Fray guys being able to make their music comfortably from Denver was encouraging for us.”

In 2013, Native, OneRepublic’s third studio album, peaked at #4 on the Billboard 200, and “Counting Stars” topped “Apologize” as the band’s biggest single, reaching No. 1 in many countries including Canada and the U.K. Tedder continued to work two jobs, as he put it—One Republic and go-to producer of major hits. Tedder had credits on over two-dozen charting singles in 2013, from Elie Goulding’s “Burn” to Demi Lovato’s “Neon Lights.” Billboard crowned Tedder songwriter of the year and estimated that he made $2.5 million for his efforts.

Tedder feels the pull between his own multiplatinum band’s music and that of his list of flashy music biz clients.

“I could stay in the studio back home in Denver and write songs six days a week, and it would be simpler and more lucrative—and there are days when that sounds appealing,” Tedder said. “But that’s only part of who I am. I’d be inclined to go that route if I didn’t know that OneRepublic has a shot at being one of the biggest bands in the world.” 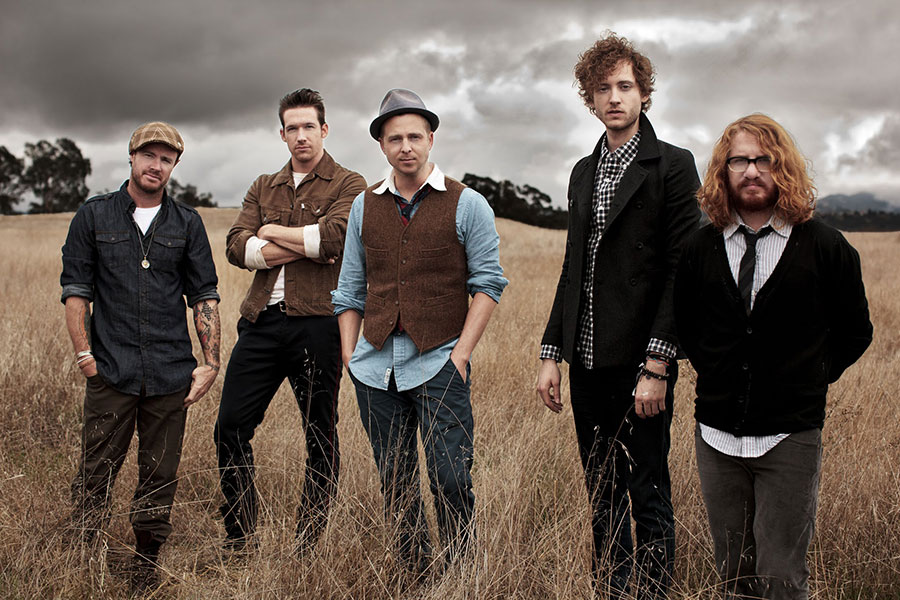