The group formed in 1990 with the merging of two Boulder outfits—the Left Hand String Band, known for progressive bluegrass, and the Salmon Heads, who did crazy Cajun music.

“I had moved to Colorado after I attended the University of West Virginia, frontman Vince Herman explained. “In Appalachia, there are a bunch of old-timey music festivals. But the Colorado scene was different. Progressive bluegrass was happening with Hot Rize and the Telluride Bluegrass Festival. It was the meeting place between California and the East Coast scene.

“Leftover Salmon came together as an accident. I had started the Salmon Heads in 1989. A couple of guys in the band didn’t want to leave Boulder to do a New Year’s gig in Crested Butte, so I got Drew (Emmitt, mandolin and guitar) and Mark (Vann, banjo) from the Left Hand guys to go with us. It was strictly ‘Let’s have some fun and play some rock ‘n’ roll folk music,’ because that’s what we knew. On the way to the gig, we were joking—’How are we going to put the Salmon Heads and the Left Hand String Band together?’ We did all the mathematical permutations, and Leftover Salmon was the worst!”

“We had a ton of gigs because the scene was real tight in 1990,” Herman said. “All the promoters and bar owners knew each other, and there was a lot of work in the ski areas. We didn’t leave the state for over two years.

“We were a bluegrass band with drums, and respectable people didn’t play traditional bluegrass that way, so we knew we couldn’t make much of a living on that circuit. We decided to play in bars, and that took a different approach. We became more of a slamgrass band, because that’s what ski bums wanted. Even after skiing all day, they had plenty of energy left, and they loved slamming into each other. The rowdier we got, the more that circle kept going.”

Joyous freeform sets at traditional events (the Telluride Bluegrass Festival in Colorado and the Merle Watson Festival in North Carolina) and raucous rock jaunts (a two-week stint on the H.O.R.D.E. tour) resulted in the band’s 1993 self-released debut album, Bridges to Bert. The band crisscrossed the country in an old yellow school bus, a grueling schedule that continued for years.

“We created this thing in our minds, and we were lucky it happened,” Emmitt added. “The big dream was to bridge the gap between the rock ‘n’ roll world and the bluegrass world. We were one of the first bands that got to play with our bluegrass heroes at festivals like Telluride, and we got to tour like a rock band with Widespread Panic and play huge stadium shows as well.”

Ask the Fish was a 1995 live effort recorded at the Fox Theatre in Boulder, but hundreds of concert recordings exist—the band encouraged fans to tape its shows. In the studio, Leftover Salmon searched for ways to incorporate the variety of musical styles heard at its concerts. Euphoria, 1997’s major-label debut on Disney’s Hollywood Records, peaked at #3 on Billboard’s Mountain Regional roundup.

But the band did better serving up bluegrass hippie hardcore in charismatic live performances for loyal followers, or “salmon heads.”

“We’re a strong touring band, and ‘rehearsal’ is one of those French-sounding words that we don’t quite understand,” Herman said of the band’s devotion to the road. “That ‘L.A. process’—’Let’s make a record and then try to get somebody to listen to it’—is one part of the music industry that I’ve never understood.

“It’s a very ‘high-touch’ kind of music. We don’t need bodyguards to get in and out of our shows. We’re just geeks like everybody else, interested in the same things and wearing the same clothes. We have that sharing of the culture in common.”

By the end of the 1990s, Leftover Salmon had the opportunity to record The Nashville Sessions, which teamed the band with an A-list of Music City’s most notable session players.

2002 started out on a sad note for Leftover Salmon with the melanoma-related death of Vann at age 38. The group experienced some internal restructuring and continued to hit the open road relentlessly, taking part in a tour with bluegrass giants the Del McCoury Band and releasing an album with the band Cracker. But the last months of 2004 brought an end to Leftover Salmon.

“Leftover Salmon was like a family, with a great amount of mutual admiration going on. There was an undeniable chemistry between Vince and Mark and me, the heart and soul of the band,” Emmitt said. “It was like three legs of a stool. When Mark went and that leg was gone, the stool wasn’t standing up on its own too well anymore.”

In 2007, Leftover Salmon returned for a handful of reunion shows and continued to tour and record. The band’s bluegrass roots remained.

“Over the years, we’ve certainly done one or two live shows that have centered around the Led Zeppelin musical universe more than Doc Watson’s,” Herman said. “But the bluegrass scene in Boulder is the reason I moved from West Virginia to Colorado. I held Hot Rize as a model of successful musicians. They weren’t selling a ton of albums, but they were playing what they wanted to fun, interesting crowds and having a good time and making a living at it—which I thought beat the hell out of flipping eggs at Nancy’s Restaurant.” 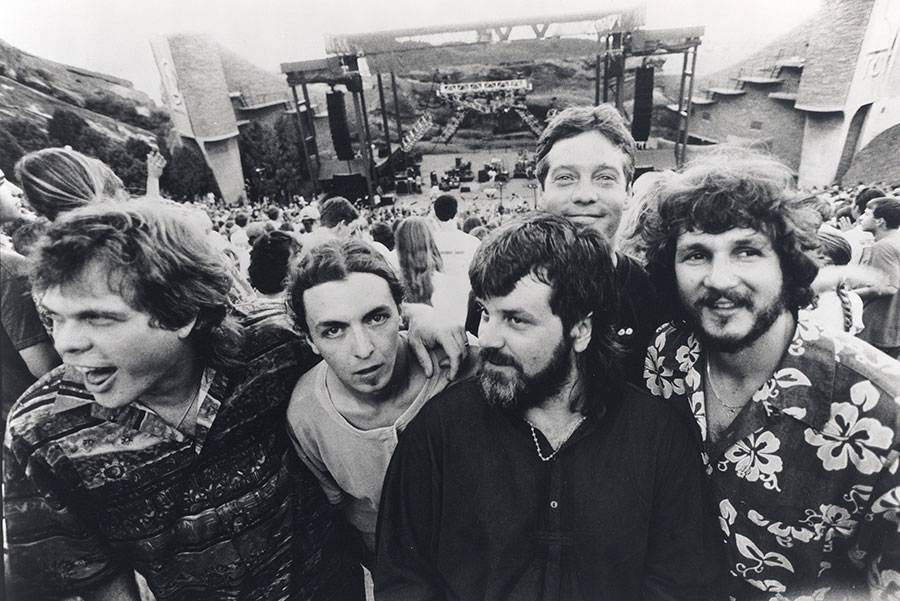