Founded by Jamie Laurie (a.k.a. Jonny 5), the Denver collective Flobots went from an underground local band to one of the most buzzed-about national acts of 2008.

“We’re all products of the Denver Public Schools,” Laurie said. “We connected with positive, kind people who were willing to push musical boundaries in the spirit of an inclusive community and curiosity and having fun together.”

After a year of writing and producing, Flobots released Fight with Tools, its debut album. Laurie rapped about human rights laws, the dark side of globalization, drug prohibition and other sharply contested topics. Flobots never saw the quirky, catchy “Handlebars” becoming a radio success, but after fans bombarded local station KTCL with requests to play it during a contest, the song went into full rotation. Soon the major labels were sniffing around, and after a sold-out show at the Gothic Theatre, the group subsequently signed on with Universal Republic, which re-released Fight with Tools unchanged.

The record raced to #15 on the Billboard albums chart, fueled by “Handlebars,” which became popular on alternative rock radio. The single peaked at #3 on Billboard’s Modern Rock Tracks chart in May 2008. The sing-along chorus –“I can ride my bike with no handlebars/No handlebars”—emphasized the value of self-actualization and activism.

“I was in fact riding my bike with no hands on the handlebars, which is something I had just learned to do,” Laurie explained. “I was riding home from the sushi restaurant where I worked as a busboy, and I went across this field next to my old middle school. It was a beautiful day, a beautiful feeling—isn’t it cool, the things that we human beings can do? And then a devil’s-advocate thought reared its head—a lot of brainpower is spent figuring out physical destruction or economic destruction, things that are ultimately negative. So that juxtaposition inspired me. When I got home, I wrote down the chorus and left it on my mom’s answering machine. I called Stephen and read it for him. We brought it to the rest of the band, and the rest is history.”

“Handlebars” raised Flobots’ profile to full-fledged pop phenomenon. The group played shows across the country, appeared at festivals, and performed on late-night television. During the 2008 Democratic National Convention in Denver, Flobots led peace-promoting marchers into the streets following a politically charged performance with Rage Against the Machine. A second single, “Rise,” was a modest hit.

Flobots continued to facilitate social change. In September 2009, the progressive rap-rock group opened up the Flobots.org Community Center in Denver, headquarters for collaborative work from school arts programs to voter registration (in 2015, the name was changed to Youth on Record).

“We’re trying to push the model beyond having an information table in the lobby during concerts—we’re committed to building and sustaining a positive organization of people,” Laurie said.

With producer/mixer Mario Caldato of Beastie Boys fame, Flobots holed up in the Blasting Room Studios in Fort Collins, Colorado, and recorded Survival Story, which reached #9 on Billboard’s Modern Rock/Alternative Albums chart. Tim McIlrath from Rise Against joined the band on the chorus of the single “White Flag Warriors”; the anti-war anthem became another modern rock hit.

“A Florida radio station was accusing Rise Against of being against the military, which wasn’t the truth, so it was good to collaborate on that song,” Laurie said. “There’s a huge difference between supporting the troops and supporting the recruitment of young people to fight wars started by politicians.”

Released from its major label deal, Flobots returned to the Blasting Room to work on its third album on the same day that Occupy Wall Street protesters camped out in New York. The movement provided a backdrop for The Circle in the Square, released in August 2012; it reached #47 on Billboard’s Top Independent Albums chart. 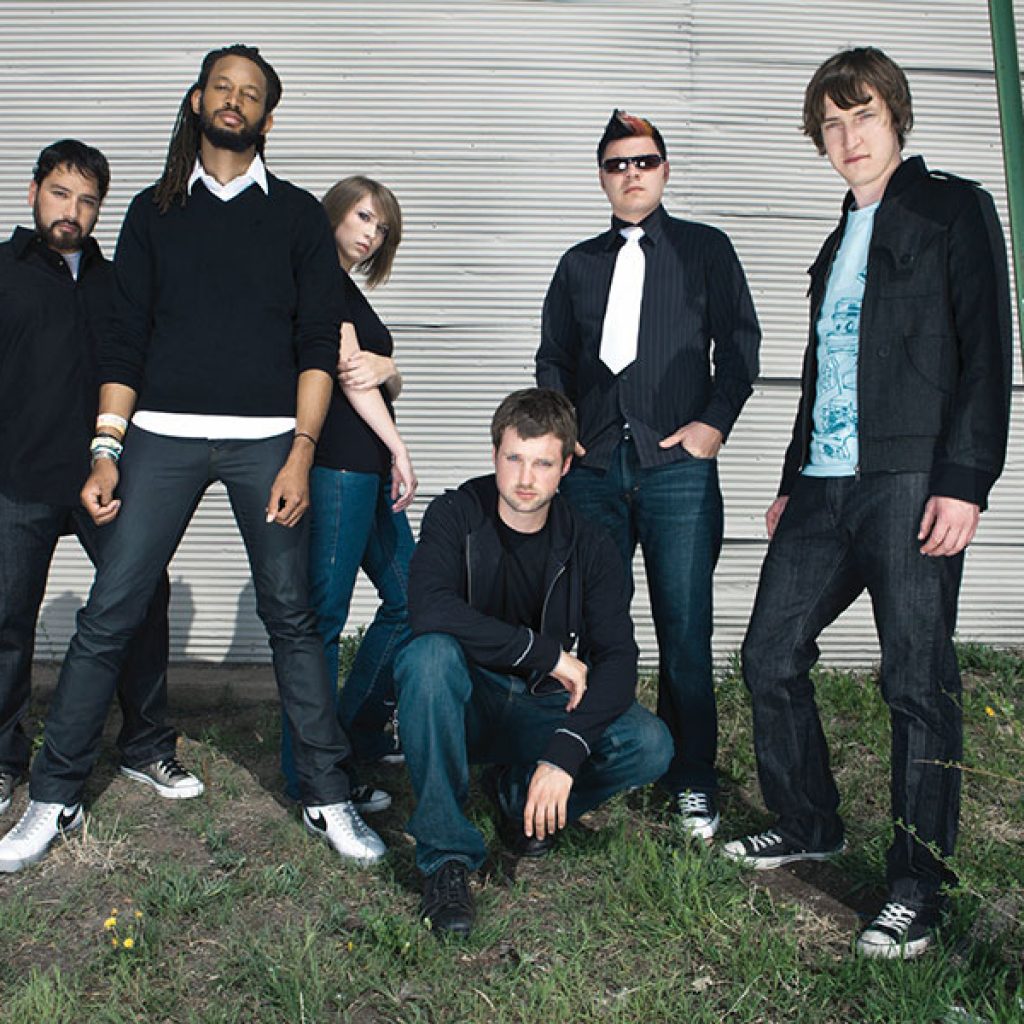