During the late 1990s and early 2000s, several ska-punk bands broke through to mainstream popularity. Along with No Doubt, Goldfinger and Skankin’ Pickle, the Denver band Five Iron Frenzy helped contribute to the scene, combining the tangy sound of ska with a horn section and catchy alternative pop-rock songs—and the positive message unified by the band’s shared Christian faith.

“We were outcasts, riding the fence between a secular fad and a Christian phenomenon,” singer Reese Roper said. “We never quite belonged in either place.”

“Five Iron wasn’t supposed to be a full-time gig,” Hoerig said. “We were getting into some poppier punk and thought it would be fun to try something like that.  We found horn players naturally—Micah’s cousin played sax, and Scott was like, ‘I’ve got a friend who plays trumpet.’ It wasn’t a big decision. We never had any idea we would be able to make a living at it.”

“Initially, we didn’t have any goals, except to have some fun and play music,” Hoerig said. “What helped us was that local promoters were bringing a lot of national poppy ska-core bands to Denver, and they wanted local bands to open. We were able to get in front of an audience.”

Five Iron Frenzy punctuated its horn-drenched, fast-and-loose live shows with salsa-style shouting and elaborate trombone solos. Before social media took hold and sites like MySpace, Facebook and Twitter turned the music industry on its head, the hard-working band built a rabid fan base by incessant touring.

“Our living expenses were extremely low; a lot of us rented a house that we shared together,” Hoerig said. “So when we went on tour, we didn’t have to make a lot of money.”

Early on, the members used tours to raise awareness for social causes—on the “Rock Your Socks Off” tour, fans were encouraged to bring clean socks for donation to local homeless shelters. Songs also tackled somber themes, such as the homophobia of Christian subculture, the plight of the Native American people and corporate hegemony. Notwithstanding, the group often incorporated its signature goofy humor into lyrics and Roper’s many onstage costumes (e,g,, a cape, crash helmet and metallic leisure suit). On the “SkaMania” tour in 1998, the entire band wore Star Trek uniforms.

The manner in which the ska-punk band displayed its faith sometimes was too much for traditional Christian marketing channels.

“Five Iron was always locked in some struggle for legitimacy that we could never quite obtain in the Christian marketplace,” Roper allowed. “Our record company never understood that we had cut our teeth playing club shows, and so they kept putting us on to play the better-paying church shows. They were usually bigger and almost always edifying, but the bigger question was, was it ministry? More importantly, was it where we belonged?”

The band did as many secular shows and tours as appearances at Christian tours and festivals. On the 1997 “Ska Against Racism” tour, featuring Less Than Jake and the Toasters, Five Iron Frenzy was the only openly Christian act.

Album releases broke into Billboard’s Top 200—Our Newest Album Ever! (peaking at #176 in November 1997), the live Proof That The Youth Are Revolting (#190 in November 1999) and All The Hype That Money Can Buy , the band’s most eclectic collection of tunes (#146 in May 2000). The octet toured internationally, playing in South Africa and Europe. Kerr left the band in 1998, replaced by guitarist Sonnie Johnston.

In 2003, Five Iron Frenzy announced its impending breakup and parted ways with a sold-out final show at Denver’s Fillmore Auditorium. The show was released as the double-disc set The End Is Here.

Claiming “We can’t even quit good,” members of the band reunited in November 2011 (Hoerig chose not to participate) and returned to the stage. Two years later, Five Iron Frenzy released its first new studio album in a decade, financed by a Kickstarter campaign; Engine of a Million Plots peaked at #118 on the Billboard albums chart. 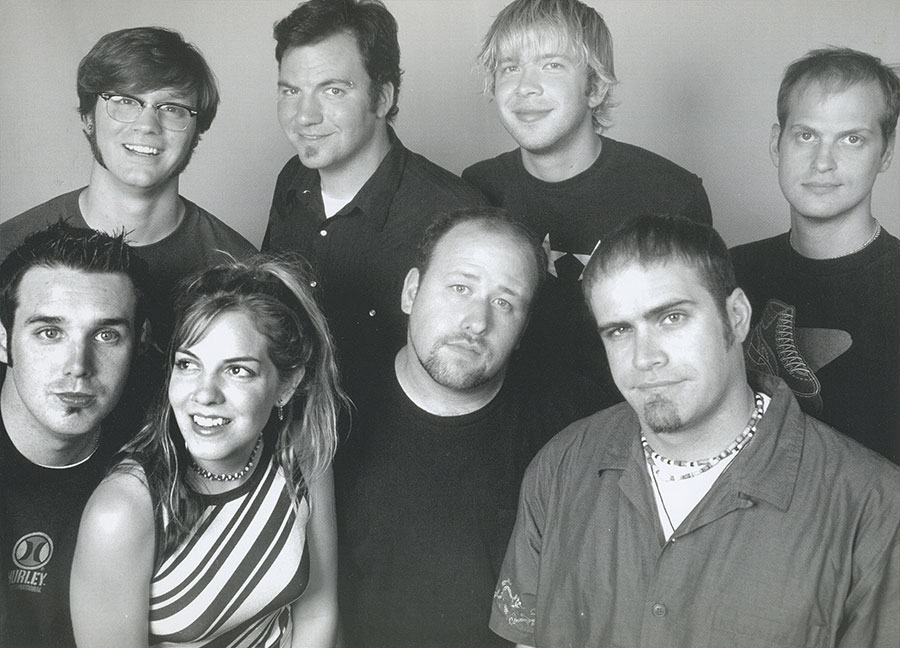