Back in the ’70s, most Americans still regarded Denver as a cowtown nestled in the Rocky Mountains. On the national music radar, the city was but a blip that didn’t rate consideration. Ebbets Field, Denver’s premier concert venue of the decade, helped change all that. The tiny club saw memorable performances during its four-year run—Tom Waits, Bob Seger, Lynyrd Skynyrd and nearly every other significant act on the upswing—in every genre, from rock, blues, and country to jazz, folk and comedy.

Chuck Morris, an innately nervous concert promoter, made his move when a club in the heart of downtown Denver called Marvelous Marv’s became available. Renamed after the famed Brooklyn Dodgers ballpark, Ebbets Field was located on the street level of the 40-story Brooks Tower, sitting near 15th and Curtis streets. The venerable high-rise apartment building, prominent for decades on downtown Denver’s skyline, is now dwarfed by skyscrapers.

The general atmosphere of Ebbets had fans and critics alike. While some praised the “intimate setting,” others said the interior still needed some work. The storied nightclub sat only 238 patrons, and the entire place—the floor, the walls, the ceiling, the bleacher-style seats—was covered in ick-orange and brown shag carpeting. The stage was the lowest focal point of the room. As the spotlights went up, all the band could see was a jury of bodiless bobbing heads.

The amazing array of star power and the sheer variety of acts that played at Ebbets Fielf is mind-boggling today. A young Billy Joel introduced a new composition called “Piano Man.” A New Year’s Eve 1974 show by comedian Steve Martin ended with him taking the entire audience out for coffee in a blizzard.

“What separated Ebbets Field was the foresight in bringing bands on the cusp of breaking out in popularity,” record producer Bob Ferbrache, who hung out at Ebbets after school and eventually got employed as a gofer, said. “It was a stream of incredible talent night in and night out.”

Practically any evening was a concert date at Ebbets Field. Emerging performers would play two shows a night, and many stayed for several nights in a row. Denver’s college-aged rock fans would flock to the club, eagerly lining up outside its doors to get the best view of their favorite band.

Crews arrived in Denver and checked into the aging Oxford Hotel. Artists gave between-show interviews in the lushly decrepit dressing room. Latecomers who arrived sans tickets begged and argued with John the Doorman and Jane Covner, the P.R. lady and general smother-over of problems for Ebbets.

Ebbets Field retained Marv’s liquor license, making it a 21 club, with a $2.50-$3 cover. Waitresses churned through the aisle scouring for thirsty patrons.

People who grew up in the era loved the whole vibe. Ebbets Field was a fun place, and everyone has a favorite story. “At the risk of sounding like a geezer, those times playing Ebbets Field are what I call the glory days of rock ’n’ roll,” Wet Willie’s Jimmy Hall said. “A lot of groups that we hung around with, like Lynyrd Skynyrd and the Marshall Tucker Band, followed each other around a circuit on tour. Ebbets Field in Denver, the Bottom Line in New York, the Paradise in Boston, the Roxy in Los Angeles, Cain’s Ballroom in Tulsa—there were about a dozen of those really cool places. They had a personality that was full of the local culture instead of generic like McDonald’s. You knew where you were, what city you were in. I miss that circuit—it’s just a dying breed.”

“Ebbets Field was a nice little club, really miniature,” Fairport Convention bassist Dave Pegg said. “There was one occasion when Minnie Riperton supported us—she was that girl who had the incredibly high voice, and that hit ‘Loving You’ was in the charts. When we turned up there, we were amazed and frightened because Minnie had a ten-piece band and their gear just covered the stage, which was only the size of a drum riser. I remember (long-serving Fairport drummer) Dave Mattacks had nowhere to set up his kit, so he did that gig with just a hi-hat and a snare drum.”

“We had some tremendous shows at Ebbets Field; it was always packed for us,” the jazz and rock keyboardist Brian Auger said. “I was always amazed to find myself that far from England to have that kind of audience show up rain, shine or snow. We liked to go early because they would generally put a comedian on to open for us. We saw people like Martin Mull, who was hysterical, and Judy Carne, the ‘Sock It to Me’ girl from (the popular ’60s NBC television show) Laugh-In. People would drop in—I remember Dave Brubeck’s sons came in with Stan Getz’s sons. It was a real party every time—just one of those special places.”

“Because of the bleacher seating, the audience was almost on top of you—you could feel the crowd’s pulse quicken when the set got going,” singer Jeff Cook said. “Tommy Bolin’s 1974 show was clearly his night. It was really hot, and we were full of adrenalin. The word had already spread about Tommy’s expertise as a guitarist, and the audience sensed that he was going somewhere in the music business. That night showed what Tommy could accomplish while jamming for fun, in the company of some of his good friends. He played with a confidence that had only grown stronger since he was playing to large crowds every night on the road.”

“I had an encounter with a bunch of sexy wrestling groupies in the room where we stayed above Ebbets,” Phillip Proctor of Proctor & Bergman said. “There was also one time when Peter (Bergman) couldn’t adjust fast enough to the altitude and we had to cancel the show. I ended up spending the night with an incredibly beautiful stewardess—she was used to altitude adjustments, but could still go down!”

After winning Billboard’s “Club of the Year” award in 1975 and 1976, Morris sold Ebbets Field in 1977 when the opportunity arose to promote bigger concerts. 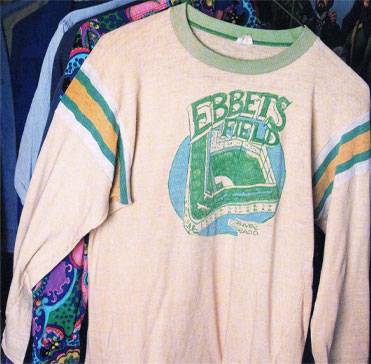 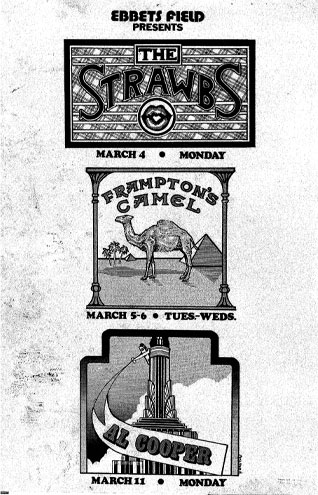