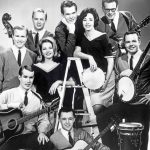 The Serendipity Singers had their beginning at the University of Colorado with seven members of the Newport Singers—John Madden, Bryan Sennett, Brooks Hatch, Mike Brovsky, Bob Young, Jon Arbenz and Lynne Weintraub; the men had all performed in various folk music trios. After working widely in Colorado, they moved to New York, where Fred Weintraub, the owner of the Bitter End nightclub in Greenwich Village, managed them. The clean-cut act added University of Texas students Tom Tiemann and Diane Decker, and the Serendipity Singers made appearances on ABC-TV’s weekly Hootenanny show and signed to a record contract. “Don’t Let the Rain Come Down (Crooked Little Man),” the group’s debut single, was a Top 10 hit and received a Grammy nomination. The follow-up, “Beans in My Ears,” hit #30 on the Billboard chart. The Serendipity Singers released six albums and performed on every variety television show of the era. The group’s name was sold in the early 1970s; new lineups performed into the early 2000s. 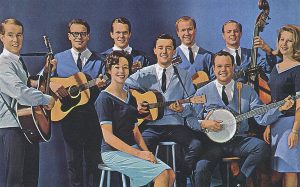 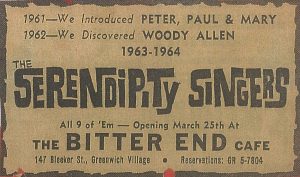 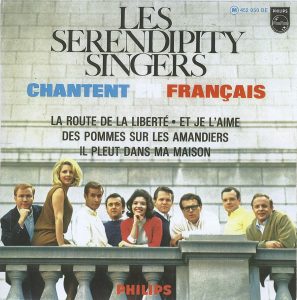 John talks with G. Brown about moving to Boulder and carving out a niche in the Colorado music scene with the Newport Singers (0:33), taking the act to New York (8:26), becoming a nonet and being christened the Serendipity Singers (11:52), performing as the host act on Hootenanny, the ABC-TV series (14:30), two hit tunes hitting the national charts (15:52), life on the road (19:15), playing The Tonight Show and hanging out with Johnny Carson (22:20), fundraising for Lyndon Johnson (24:24), the influence of the Beatles (24:58), leaving the group for a career in law (26:26) and how show business enhanced his trial attorney skills (37:20).