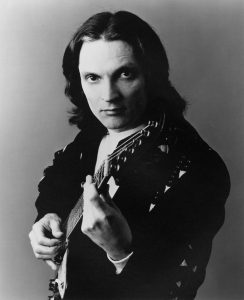 One of the most celebrated slide guitarists in the world, Sonny Landreth communicates an innate feel for zydeco and Cajun rhythms while speaking a bold rock language in his music. Delta blues first fired his interests, and his continuous absorption in music led from his daily radio listening as a kid to his first teenage bands to his college music studies—and then to Colorado. In the late 1970s and early 1980s, Landreth lived in Allenspark and Estes Park.

“I began a routine, sort of coming and going from Louisiana to the Boulder-Denver area. Growing up in southwestern Louisiana embeds you in a culturally rich heritage—the styles of music, food and dance are all part of a special way of life. When I was 20, I took for granted all these influences that existed in my own backyard. But when I moved to Colorado, it was the first time I was exposed to players from all over the country working in so many different styles. This encounter and the awesome power and panoramic beauty of the Rocky Mountains opened up a brand-new perspective for me.”