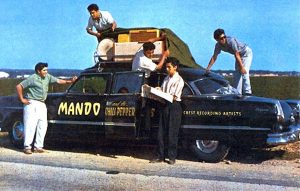 Latinos were under-represented in early rock ’n’ roll. In 1957, a year before “La Bamba” by Ritchie Valens and “Tequila” by the Champs (written by saxophonist Danny Flores aka Chuck Rio), Armando Almendárez was leading Mando & The Chili Peppers—one of the first Hispanic rock ’n’ roll acts.

Born in 1935 in the Rio Grande country, Almendárez played conjunto music on his accordion in San Antonio, a predominately Hispanic town in the ’50s. As Conjunto Mexico, his band recorded local Spanish-language records before waxing a version of Chuck Berry’s “Maybelline” on Rio Records, using accordion as the lead instrument. The lineup also included Jesse “Chucho” Perales on baja sexto, a 12-string Mexican guitar.

Almendárez’ next band, Mando & the Latineers, featured Rudy Martínez (piano), Abel Garcia (sax), Juventino Elizondo (drums), Aaron Lasater (bass) and Chucho moving to electric guitar. They played at the Dunes in Las Vegas (acquiring a Packard to transport the members and their gear), and were advised to try their luck in Denver, a city short on rock ’n’ roll talent. Arriving in town on January 3, 1957, in the middle of a snowstorm, the group was drawn to the lights of the Saddle Club, in the 1200 block of 20th Street. Mando & the Latineers auditioned and were hired.

Within a month, the owner of Golden Crest Records, Clark Galehouse, had his plane grounded on his way from New York to a music convention in Idaho; he found his way to the Saddle Club, where he was impressed enough by the band to offer them a chance to record in New York. By now, Lasater had returned to San Antonio, and Almendárez was handling bass along with singing.

The first single was a version of the classic “South of the Border” b/w “Don’t Say Goodnight” in May 1957. The members were surprised to see that the name on the label read “The Chili Peppers vocal by Armando,” as Galehouse had changed their name. The A-side had a New Orleans feel with Fats Domino-style piano triplets, which generated airplay in that market as well as charting on Denver radio. Denver Policeman Abe Levine penned the band’s next single, a novelty titled “I Love to Eat Chili in Chile,” released in October 1957; it was backed with a rocked-up cover of the George Morgan country tune “Candy Kisses.” The record was credited to Mando & the Chili Peppers.

The band shortly released a full album, On the Road with Rock ’N Roll, mixing originals (“Swingin’ Baby”) and country songs done in a rock ’n’ roll style (“San Antonio Rose”). Mando & the Chili Peppers performed all over the region and in California, where they were introduced as “Mando & the Chili Peppers, the band that made the Rocky Mountains rock.”

In 1958, the band cut its final single, “Baby Baby I Can’t Believe” b/w “Someday (You’ll Want Me to Want You).” The sound captured dance music by a spirited if unpolished bar band.

By 1960, most of the band was out of music and back in San Antonio. Mando went to Chicago and played bass with bluesman Eddie Clearwater. Chucho’s obituary from June 2014 stated that he returned to conjunto music and taught bajo sexto for decades at the Guadalupe Cultural Arts Center and Palo Alto College.