In the late ’90s, Brethren Fast earned a reputation along the Front Range for white-hot live shows that were reckless adventures in self-described “electrified hillbilly hot-rod funk.”

Guitarist “Dynomite” Don Messina and his bassist brother, Mik “The Stik” Messina, played in different bands and developed their own styles before deciding to join forces. Brethren Fast combined Don’s old-school rockabilly guitar licks with Mik’s funkified bass grooves. After a revolving cast of drummers, the band stabilized in 1998 with the addition of Gordon Beesley (who had short stints in Durt and Sponge Kingdom, and went on to become the founding drummer of the Railbenders).

Brethren Fast was chosen to be sponsored for Budweiser’s “In-Concert Program,” and the band played on the main stages of some of Colorado’s biggest outdoor festivals, including the People’s Fair, LoDo Music Festival, KTCL’s Big Adventure, Cherry Creek Arts Festival and the Taste of Colorado. The band performed live during intermissions at Colorado Avalanche games and was voted by Westword readers as one of Denver’s best bands for four years running.

The band was known for its relentless touring and relentless partying, logging around 200 raucous live shows each year throughout Colorado and the Midwest, as well as brief tours through Texas and Florida and the West Coast. The members’ Brian Setzer-inspired sideburns, handsome looks and often hilarious on-stage antics drew scores of loyal female admirers. Their lives—and their songs—were largely about drinking and having a good time.

Sadly, after the band’s heyday, Brethren Fast’s story took a tragic turn. Don Messina died in a 2015 car crash on Lookout Mountain. Beesley, who found his true calling as an Arvada police officer in 2002, was killed in the line of duty in June 2021. Mik Messina died of organ failure in July 2021. 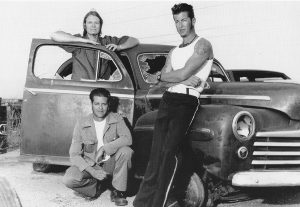