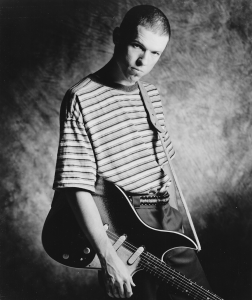 Born in 1964 in Canada, Bill White Acre moved to Boulder, Colorado after high school to study music at Naropa University. Becoming known for his versatility as a composer and his use of open tunings and percussive guitar playing, White Acre was voted “Best Solo Performer of Denver” by the readers of Westword in 1987. Along the way, he played many shows with Electric Third Rail and Big Head Todd & the Monsters, as well as supporting gigs for Roy Buchanan, Bobby McFerrin and Suzanne Vega. He also recorded two albums, Atlantis Ripples and 9 Songs, in the studio he built. White Acre migrated to Los Angeles in 1989, where he distinguished himself as an award-winning songwriter, vocalist, guitarist and founder of Big Planet Music, Inc., scoring music for television, film and advertising.