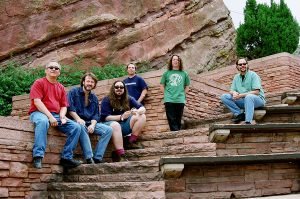 For years, Widespread Panic never cracked Billboard’s Top 200 album chart or had a music video on MTV. But the neo-hippie jam band, formed in the early 1980s in the college town of Athens, Georgia, dominated the Colorado market in a way few bands have ever accomplished. For many summers, the road-friendly group headlined three consecutive nights at Red Rocks Amphitheater, officially holding the record for sellout performances at the famed outdoor venue.

From the early days playing in small bars, Widespread Panic staked its reputation on a freewheeling, amorphous mix of country-blues with touches of jazz-fusion and Southern rock. Without traditional music industry support, the sextet used extensive touring and the internet to cultivate a vast, dedicated following. The group changed its set list every night, allowed fans to tape shows and generate hundreds of websites dedicated to the music and mission. Standout performances at Blues Traveler’s H.O.R.D.E. festival and other locales increased Panic’s grassroots appeal.

In the late 1990s, Panic targeted Colorado, and fans were quick to get on board. Photos of Red Rocks Amphitheatre appeared prominently on 1998’s two-CD live release, Light Fuse Get Away, and Panic’s 2000 summer tour kicked off at the famed outdoor venue, with the three shows (some 27,000 seats total) selling out in 44 minutes.

“It might not be the path that everybody treads down, but it seems to be working with us,” lead singer and guitarist John Bell said. “You just do what you feel is right at the time. We’re well-practiced at that kind of loose formula.”

That formula, Bell explained, dated to the 1980s. “Back in ’87, America was experiencing a recession. A lot of the ‘hair bands’ had big light shows, very flashy and effect-laden presentations. That stuff carried such a high dollar that it wasn’t really affordable.

“We were still in our little world, just getting our sea legs as far as touring went. We endured for a couple of years, and then there was the recognition that there was some value to what we were doing. We didn’t have to be gimmicky. We could just be ourselves, and there was a market out there that would help sustain us as a band, to where we could eat once a day and play music.

“A few years later we met Blues Traveler, Phish and Col. Bruce Hampton & the Aquarium Rescue Unit. From Colorado, we met Leftover Salmon and Big Head Todd & the Monsters. Here were bands that had also acquired established niches. We were very different, but we all seemed to attack the music and crave what was going on—‘Hey, there’s a common experience in different parts of the country.’

“That was a good feeling right there. Nobody was into hyping themselves as a band—the egos were at a minimum. You could just get on with playing music. You were satisfied with pushing yourself, and you were excited to see what other people were doing. Instead of competition, there was inspiration.”

Widespread Panic did big business on the road—according to trade publications, the band was a Top 30 concert draw in 1998. In the south, the group’s influence was legendary. A record 63,000 people came to its New Orleans Jazz & Heritage Festival show in 1999, and 100,000 attended an album release party in the streets of Athens.

“There’s so much depth to being part of a band relationship,” Bell said. “All of a sudden you’re looking at life-long friendships. Music plays a powerful role in communicating some of these feelings that you’re going through as human beings.”