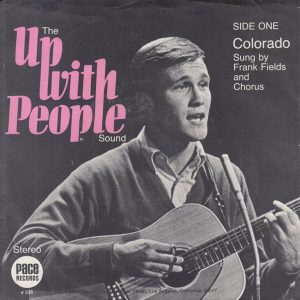 In 1965, the first public Up with People shows were performed. Brothers Steve, Paul and Ralph Colwell had hooked up with Blanton Belk and Herb Allen to create Up with People as an alternative to the “turn on, tune in, drop out” motto espoused by hippie culture. Using a positive message to reach squeaky-clean American kids, the group became a worldwide force (it has the record for the most Super Bowl halftime performances). David B. Allen and Paul Colwell wrote song “Colorado” to be used in Up with People shows; in 1969, Rep. Betty Ann Dittemore of Englewood proposed that it be adopted as the new Colorado state song. It was introduced to the state legislature by popular Denver performer Pete Smythe with a children’s choir. The proposal failed after much debate and controversy. Up with People’s outreach continues today with headquarters in Denver, Colorado.