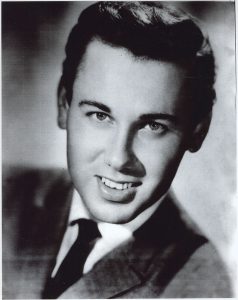 In 1959, Tommy Facenda made the national charts with one of the most unusual—and difficult—novelty discs of all time.

Atlantic Records released “High School U.S.A.” in 28 local versions across America, each mentioning the names of specific major high schools in a particular city. Facenda, who hailed from Virginia, sang the verse over each time in the studio to add the name changes.

The effort picked up grass roots appeal, as kids in all the major markets listened to Facenda singing about their schools. The Colorado version crammed in 15 high school names. It refered to “Fort Morgan leading the band/Denver High was clapping their hand/Englewood was doing the crawl/Alamosa was having a ball/Walsenburg was hopping, too/Well, I want to do the high school bop with you…”

“I remember looking up the schools in the New York library,” Facenda said. “I did most of the research, because I was the one that had to sing it. I had to put them to a rhyme and a beat in the song. It was a nightmare!”

Atlantic gave each version of the song its own individual record number—from 51 to 78. The Colorado single was Atlantic 77.

“On tour, I often got confused what version to sing in the town I was going to at the time. Back then we didn’t have what were called concerts, we did rock ‘n’ roll shows—there might have been 20 of us on one tour package, and we all traveled together on a bus. Everybody else could just sing the same hit recordings all the time. While they were sleeping, I’d have a little pen light to study the upcoming town’s high school name list.”

“I was real fortunate and lucky because it was just the idea of the song—it sure wasn’t me,” Facenda said. “Anybody could have made it a hit.”