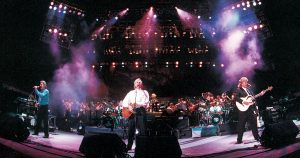 During their initial heyday from 1967 to 1972, the Moody Blues had some sensationally successful recordings in their “cosmic” symphonic rock style. In the mid and late 1990s, the Moodies enjoyed another period of great success. The band ranked as one of the decade’s top concert draws, playing around the world augmented with symphony orchestras.

The concept started with a show in Colorado on September 9, 1992, when the band recorded a live album and television special, A Night at Red Rocks With the Colorado Symphony Orchestra.

“We wanted to celebrate the 25th anniversary of our Days of Future Passed album,” singer-guitarist Justin Hayward revealed. “In the absence of a record company revitalizing it, we figured we’d do it ourselves. We thought we’d perform with an orchestra before a live audience—we’d never done it. And Red Rocks had been a favorite venue of ours. It’s a stunning, beautiful setting.”

Released in 1967, Days of Future Passed was one of the earliest collaborations between a rock band and an orchestra. The Moody Blues were a trifle ahead of their time. “Everyone thought we were crazy,” Hayward laughed.

Uniting the group with the London Symphony Orchestra, Days of Future Passed was a landmark in rock recording, establishing a wave of progressive concept albums characterized by classical overtones. The album spawned the massive hits “Nights in White Satin” and “Tuesday Afternoon,” and the Moody Blues’ following increased to messianic proportions.

On that special summer night at Red Rocks a quarter-century later, the Moody Blues were able to recreate their majestic studio sound as originally envisioned. After years of struggling financially, the Denver Symphony had disbanded, only to rise again as the Colorado Symphony Orchestra. The 84-member-strong CSO backed the Moody Blues with arrangements supplied by Denver-based travelling conductor Larry Baird, a rock and classical buff who studied theory and composition in college. Nobody had saved the scores on the classic Days of Future Passed for the musicians, so Baird had to listen to the record and recreate the parts. Other songs not previously with orchestra were also newly scored for the august occasion. The symphonic sumptuousness of the Moodys’ early hits was discovered by a new generation of young fans.

“We did that one night at Red Rocks for a PBS special,” Hayward said. “It was really the brainchild of our late manager, Tom Hulett—he had a desire to see us with an orchestra, and he went about putting it together. We thought it would be a one-off thing. And the response came from all over, from orchestra directors and even mayors of towns—‘Can you come and do this show with our orchestra?’ That’s when we realized that most decent-sized cities and towns in America have their own professional-quality orchestra. That doesn’t exist in Europe, so we didn’t know about it. I thought the logistics would be impossible.

“But of course they’re not. Tom had toured with Elvis Presley—‘Hey, Elvis used to pick up 47 musicians every night and it sounded great.’ So we thought we’d try it. The stage is ours, the seats are ours, the microphones are ours—the only thing that changes is the players. I’m not sure a lot of people know they’ve got an orchestra in their town until they come and see the Moodies.”

A deluxe edition two-CD set of the Moody Blues’ A Night at Red Rocks With the Colorado Symphony Orchestra, released in 2002, presented the entire two-hour concert for the first time.