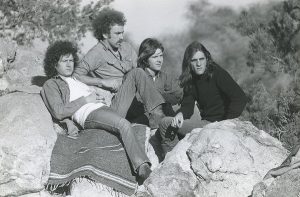 The Eagles were the archetypal California band of the 1970s. Their name was synonymous with the country-rock movement that sprang up in Los Angeles. But the act’s first-ever concerts were in Colorado.

In the summer of 1970, Linda Ronstadt’s manager had an idea for a supergroup to back up his star singer, coming up with the combination of Glenn Frey (a guitarist and singer from Detroit), Don Henley (a singer and drummer from Texas), Bernie Leadon (a multi-instrumentalist previously in the Flying Burrito Brothers and Dillard & Clark) and Randy Meisner (formerly the bassist in Poco and Rick Nelson’s Stone Canyon Band).

They eventually left Ronstadt and took shape as the original Eagles. In 1971, David Geffen (the head of Asylum Records, home of Jackson Browne and Joni Mitchell) got involved as manager. He provided expense money for the guys to leave Hollywood and get their act together so that they could come back and blow minds rather than develop in front of everyone’s eyes.

They went to Colorado and got gigs in local bars. In Aspen, “Eagle” played two stints at the Gallery (four sets a night, legend had it) and the whole town got behind them. Eagle was then scheduled to perform December 11-15 at Tulagi, the nationally famed 3.2 beer nightclub on Boulder’s University Hill. It was finals week at the University of Colorado, limiting attendance to 15 to 50 people a night. The band got paid $500 for the five nights.

Yet Henley and Frey sat at the bar drinking pitchers of 3.2, confident to the point of insisting that they were going to be huge stars. “Oh, yeah, we were cocky little bastards,” Henley said. “Those gigs were sort of our coming-out party.”

Frey said they were matter-of-fact over the inevitability of success. “We had it all planned. We’d watched landmark country-rock bands like Poco and the Flying Burrito Brothers lose their initial momentum. We were determined not to make the same mistakes. This was going to be our best shot. Everybody had to look good, sing good, play good and write good. We wanted it all. Peer respect. AM and FM success. No. 1 singles and albums. Great music. And a lot of money.”

The members dressed in the fashion of the time, ripped jeans with paisley patches. One particularly cold night, the heat went out at Tulagi and Leadon played with gloves on. The gigs drew small but voluble crowds. A beered-up patron kept screaming, “Play some Burritos, ma-a-a-an!” “We’re a new group with our own songs,” Frey earnestly explained from the stage.

Those songs served as an audition for British producer Glyn Johns, whose work with the Beatles, the Rolling Stone and other music giants had made him a legend. “He was this superstar producer who none of us had ever met,” Henley noted. “He agreed to fly over from England and listen to us when we played Tulagi. I got designated to drive to the airport to pick him up.

“It was a horrible, cold, snowy night, and nobody was at the concert. We were nervous and not very good, and Glyn passed. Later, he came to Los Angeles on a more casual scale when we weren’t so keyed up about performing. He listened to us rehearse, singing harmonies with acoustic guitars, and that’s what got him.”

Within weeks, Eagle became the Eagles. The band went to London to record its first album, produced by Johns. Eagles, released in 1972, was a huge success, helped by the hit singles “Take It Easy” and “Peaceful Easy Feeling.” The Eagles went on to become the most successful American music act of the 1970s with sales of more than 50 million albums worldwide.

Henley maintained a residence in Woody Creek, near Aspen, for decades. “I fell in love with the place. Colorado was great back then, but it’s changed a lot now. It’s getting a little glitzy up there.”

Frey continued to live in Aspen until his passing in 2016. “After the shows at the Gallery, I swore if I ever made a dime in the music business, I wanted to have a house there. It’s a good place to practice. If you can sing in Aspen’s thin air, you can sing anywhere.”