They didn’t become national recording stars, but the Daniels lived the rock ’n’ roll dream for a short time in the ’60s as the darlings of Denver’s debutante set.

The band—Brian O’Meara (guitar/bass), Dave Hardy (guitar/bass), Rick Newton (guitar/organ) and Mike Cooper (drums)—was named after the whiskey Newton’s dad favored. O’Meara had studied guitar with Chet Atkins’ half-brother Jimmy, while Hardy took lessons from Gene Chalk, also an Atkins student. “Our heroes were the Astronauts (from Boulder, who charted nationally with ‘Baja’),” said O’Meara, whose family started selling Fords in Denver in 1913. “When I saw them, it was one of those moments in life when you say, ‘I wanna do that!’—they had such presence with their tuxedos plus Fender amps and guitars.”

O’Meara attended Regis High School, Cooper was from George Washington and Newton South. The Daniels’ lineup distilled when original 2nd guitarist Tim Breen was severely injured in a fall and Hardy (who had attended East and Thomas Jefferson) filled the void for a gig at Galena Street East, a club located in the basement of the Elks Building in Aspen.

“That club was a lot like the Cavern Club (in Liverpool)—all rock walls,” O’Meara said. “We played in Central City plus we were the house band for debutantes. Dad always said, ‘You guys need to look like something special, like you are there to do business.’ We could all read music, so we played fashion shows like Joslins, Neusteter’s and the Denver Dry—soft background music.

“The Galaxy on west Alameda was owned by Ed Weimer, and we played there a lot as well. Since we joined the Musicians Union, we could play at the Denver Coliseum. Plus, my dad knew the Gurtler family, who ran Elitch Gardens, so we got to open for the Association at the Trocadero Ballroom.” Between 1965 and 1967, the Daniels also opened shows for Chad & Jeremy, the Beau Brummels and the Box Tops.

“We played every Friday and Saturday, plus we rehearsed, so we had no social life,” O’Meara said. “But we were making pretty good money. We started out being influenced by the Everly Brothers and the Beach Boys, but by ’66 we were more of a blues band—Paul Butterfield, the Spencer Davis Group and the Animals. And we were loud! We had two bass cabinets each with two 15-inch Lansing speakers.”

Indeed, a May 22, 1966 article in The Denver Post indicated that the Daniels owned $6,000 worth of equipment plus their own van (from O’Meara Ford, of course). The group was featured in the December 1965 issue of Seventeen with a young Barbara Bach, later to become Mrs. Ringo Starr, on the cover. “They wrote about us since we were playing in Aspen,” O’Meara explained. “We stayed in the Hotel Jerome, which was a fleabag then but now costs $700 a night.”

“We were connected,” Hardy related. “My grandparents, for instance, were members of Cherry Hills Country Club, and that helped us get fraternity parties and school dances. We played church-related dances at the Barn (for Park Hill Methodist Church) and the Orbit (East Denver Christ the King).” Being alums of differing Denver high schools also helped secure a myriad of school dances.

In 1967, the Daniels recorded four songs that were never released (they can now be found on YouTube).

“We broke up amicably when Mike Cooper went into the Navy in November 1967”, O’Meara reported. “I went to U.S. Male to play lead guitar.” One of the members of that Denver band was Brett Tuggle (guitar/keys), “a great musician who is still playing—he’s been with David Lee Roth, Fleetwood Mac and Mitch Ryder. I got married in 1969, and when Brett left to join Ryder (in Detroit), I didn’t want to keep staying out until 2 a.m. eating at the pancake house. I thought I might go into marketing writing jingles for Ford, but I ended up buying into our family company.”

After the Daniels (and the Navy), Newton and Cooper joined a new group, Pamela Webb & the George, and released a single on Liberty in 1969—“Hold On, I’m Coming” b/w “Peter O’Toole.” Hardy became the catalyst for several Daniels reunions, including a memorable 30th anniversary celebration of the George Washington High School class of 1966. 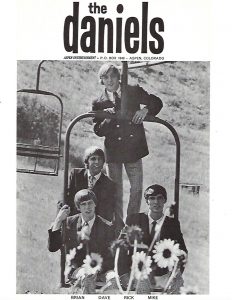 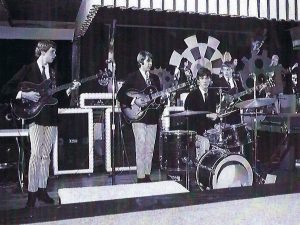