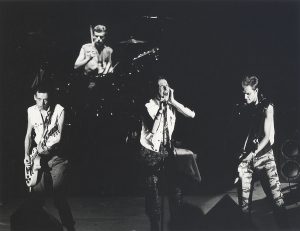 The Clash at Red Rocks

Nothing short of a major event was expected when the Clash, one of punk rock’s biggest acts, opened the second leg of their American tour by invading Red Rocks on August 9, 1982. The band had never appeared in Colorado.

But singer-guitarist Joe Strummer admitted he had no fun at Red Rocks. He explained the abysmal acoustics (some bass cabinets blew up during the first number) by noting the lack of a sound check: “When people have waited five years to see us, we’re not gonna ruin the suspense in front of a mid-afternoon crowd by going ‘Testing-one-two-three’ into a microphone.”

Strummer never really cut loose onstage. He blamed his own poor performance on the weather (“Too cool and dry—I need it humid around my throat to get my voice worked up”) and the stage itself (“There was too much space—I couldn’t see the crowd”).