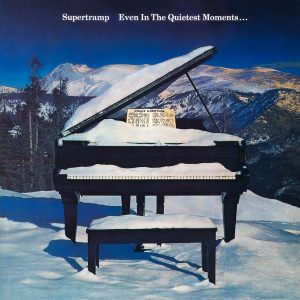 Even in the Quietest Moments..

In the 1970s, a veritable who’s who of rock music’s elite was lured to the legendary Caribou Ranch recording studio, located near Nederland. Even in the Quietest Moments..., the fifth album by Supertramp, was recorded mainly at Caribou. The English rock band’s crew dragged a gutted grand piano up to a snowy mountaintop at Eldora Mountain Resort (a ski area near Caribou Ranch), covered it with snow and photographed it for the album cover (the sheet music on the piano, though titled “Fool’s Overture,” is actually “The Star-Spangled Banner”).

Roger Hodgson’s opening song, “Give a Little Bit,” became an international hit single for Supertramp. He had written it at age 19 before introducing it to the band years later. And it nearly became the recording debut of Frank, the huge black and white cat that lived at Caribou.

According to engineering assistant Tom Likes (many of his Caribou tales can be read on musicbizsecrets.com), when Hodgson was recording the acoustic guitars for “Give a Little Bit,” he wanted to get a “special” sound. He had the idea to record them in the elevator, which was a hydraulic lift similar to those used in garages to raise cars. It had a hardwood floor, rather than a huge metal plate, to match the décor of the studio. “There were walls on three sides of it with the front being open,” Likes notes. “Brass gates kept someone from accidentally falling from the second-floor studio to the first floor.”

Hodgson put a chair on the platform, and engineer Peter Henderson ran cables out of the studio onto the platform for microphones and a headset. The elevator was lowered halfway between the floors. “This way the guitars sounded fuller than they did in the acoustically dampened studio. After some experimenting with microphone placement and such, everyone was happy with the sound and we began recording.” 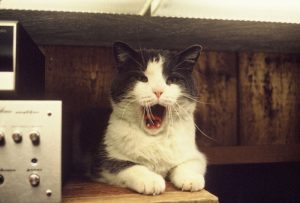 Just as Hodgson was playing the final rhythm for the end of the song, Frank the cat gave out a loud howl that was recorded on the guitar track. When it came time to do the final mixing, there was an argument about whether to include it or not. “Not won out, and that’s why the song fades rather quickly,” Likes explains.

Both “Fool’s Overture” and the title track also got a fair amount of FM album-rock play, and Even in the Quietest Moments… reached #16 on the Billboard Pop Albums chart. It was Supertramp’s first album to use Henderson, who would work with the band for their next three albums as well. Frank’s services were not retained.