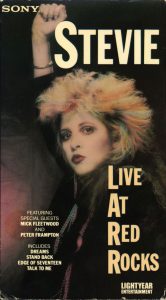 How does Stevie Nicks love Colorado? Let her count the ways.

“My ancestors immigrated there from Cologne, Germany. My late great-aunt lived up in Cripple Creek—she ran a brothel. I have a lot of relatives in Colorado Springs. And I have real bad asthma, and Denver has the best doctors in the world. I feel like Colorado is mine.”

In 1974, Nicks and guitarist Lindsey Buckingham were not getting along; their Buckingham Nicks album had been a commercial failure. Nicks wrote “Landslide” and “Rhiannon” when she was staying in Aspen.

“Lindsey was on the road with Don Everly. I wasn’t making it big in the music business. It had gotten to a point where I was unhappy, tired, lonely and confused. I was in Colorado and surrounded by these incredible mountains, the only time in my life that I’ve lived in the snow, and you realize everything could tumble around you. That’s where the line ‘If you see my reflection in the snow-covered hills’ in ‘Landslide’ comes from. I was trying to figure out what I was going to do, make a decision. I went, ‘Okay, I’m sure we can do it.’ Three months later, Mick Fleetwood called and asked us to join Fleetwood Mac.”

Both “Landslide” and “Rhiannon” became two of the most popular tracks from the 1975 Fleetwood Mac album. Nicks embarked on a solo career in 1981. For several years after U2 eternalized Red Rocks Amphitheatre with Under a Blood Red Sky, other acts were apparently too intimidated to use the legendary outdoor setting for filming. But Nicks broke the ice in 1986, when she filmed the final performance of her American tour at Red Rocks—where she had played two sold-out shows just eight weeks before.

“They told me, ‘You can’t go back so soon and film there, nobody’s gonna come,’” Nicks said. “I said, ‘I can—you don’t understand, this is a sacred thing to me and everybody will be there.’

“And it sold out. I knew in my heart where I should do my movie, where my feet are planted,” she continued. “Every year of two I need to go to Red Rocks and spend some time, whether I’m performing or not. If I ever have children or grandchildren, if I want to explain my legacy to anybody, I’ll put on my Live at Red Rocks…”

Director Marty Callner, who had conceived of most of Nicks’ rock videos, turned Red Rocks into a giant natural sound stage. Backstage, production gear was jammed into every available space: extra audio equipment (a 24-track mobile recording facility was brought in from Los Angeles), pyrotechnic effects and the usual maze of cables and wiring that were part of any filming operation. It took Callner and his helpers three days to set up Red Rocks to their specifications.

Nine cameramen filmed around the stage and one zoomed above the park in a helicopter. And the sellout crowd wasn’t even privy to the majority of the footage. Following the filming of the two-hour concert, the crews ate and then Nicks and her band embarked on another three-hour stint of shooting close-ups sans audience. The equipment wasn’t completely loaded until 9:30 the following morning; another crew was just showing up to oversee the Oak Ridge Boys performance that night.

The resulting video aired on the Showtime cable network under the title Give a Little, then released commercially as Stevie: Live at Red Rocks. The hour-long concert video featured her Top 10 hits (“Dreams,” “Stand Back” and a 15-minute version of “Edge of Seventeen”) and guest performers Peter Frampton and Mick Fleetwood.

Some controversy swirled around the use of special effects. The video included numerous sprawling shots of the mountains and surrounding area, but the directors took the liberty of embellishing the outdoor footage. During “Dreams,” when Nicks got to the line “Thunder only happens when it’s raining,” flashes of lightning were superimposed over the Denver skyline.

The Red Rocks show had ended when 25 doves were released into the crowd. One of the birds refused to leave Nicks’ hand—and fifteen minutes later she was still clutching the dove backstage and demanding that a separate cage be found for him.

“I want to find a good home for him,” she explained. “I want to visit him when I come back next time.”

But Nicks kept him—only it was a her, named Rhiannon, of course.

“She wouldn’t leave. I couldn’t get her away, so I said, ‘I guess this is my dove.’ She lives with me, and I’ve since gotten two more…”