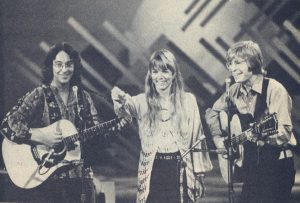 Windsong (1975) was probably John Denver’s most nature-inspired album. It lent its name to his newly established record label—formed, he said, to further Colorado musicians and his own self-taught knowledge of his craft. The first act signed to Windsong was the Starland Vocal Band, which featured Bill Danoff and his wife, Taffy Nivert.

Danoff had been a folksinger working nights as the light and sound man at a club in Washington, D.C., where he met Denver, who was near the end of his stretch fronting the Chad Mitchell Trio. Soon Denver recorded Danoff’s “I Guess I’d Rather Be in Colorado.” The friendship between them was cemented when they co-wrote Denver’s first smash hit, “Take Me Home, Country Roads.”

Formerly members of the band Fat City, Danoff and Nivert created the Starland Vocal Band, fine-tuning the clean-cut, all-American quartet’s rich pop harmony sound before signing on with Windsong. The band’s first single, “Afternoon Delight,” was released in early May 1976, and nine weeks later, the Starland Vocal Band and the label had their first and only No. 1 single. It helped earn the group five Grammy nominations and two awards, including for Best New Artist.