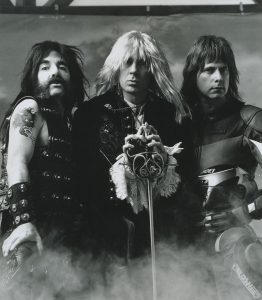 The funniest movie ever made about rock ‘n’ roll was 1984’s This Is Spinal Tap, a fictional and admirably accurate spoof of heavy metal stereotypes and the music business (penned by director Rob Reiner and actors Christopher Guest, Michael McKean and Harry Shearer).

The “rockumentary” introduced a gracelessly aging British band. The music was passable fare with bright, imaginative lyrics (“My baby fits me like a flesh tuxedo/I want to sink her with my pink torpedo” from “Big Bottom”), so many of metal’s youthful adherents didn’t get it. But This Is Spinal Tap became an inside joke for anyone who had spent a few minutes backstage at a rock concert. The people laughing hardest were the very folks the band lampooned—musicians like Ozzy Osbourne and Aerosmith’s Steven Tyler claimed to be the inspiration for the film.

In 1992, Spinal Tap re-emerged. The new conceit? The band members turned their collective backs on rock stardom after the disastrous “Smell the Glove” tour documented in This is Spinal Tap (the group had a history of constant personality clashes and musical differences). But Spinal Tap had decided to reunite, claiming that the movie was “a gross distortion.”

“It was a double-edged gun—it made us infamous, but it made us look pathetic,” guitarist Nigel Tufnel said. “The director, Martin Di Bergi, chose to show us not finding the stage. But you saw us performing. We must have found the stage on those occasions.”

A tour celebrated Spinal Tap’s 25-year reunion, and it opened at the AIr Force Academy’s Arnold Hall in Colorado Springs. (In This Is Spinal Tap, the band was mistakenly booked at an Air Force base—Tufnel stormed off during the gig when his radio-miked guitar picked up air-traffic control messages.) Spinal Tap amplified the absurd pomp of metal music, and the devastating parody earned sustained laughter, not just scattered giggles.

Prior to the concert, Tufnel explained his latest invention.

“Guitarists are always saying, ‘Could you make the tone a bit warmer?’ I’ve designed something. It’s made of wool and goes over the knobs of the guitar—it’s a ‘tone cozy.’”

Spinal Tap assaulted the media, and the poker-faced band cropped up giving comical interviews to every magazine and talk show in sight. People commented that the single “Bitch School” was sexist. “It’s about dog obedience,” Tufnel said. “The three of us love dogs. Read the lyrics—‘You’re so fetching when you’re on all fours.’ How can you misconstrue that?”