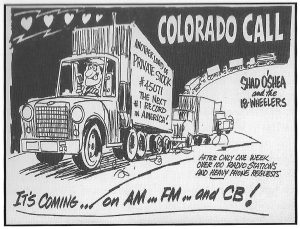 By the mid 1970s, Shad O’Shea was a veteran of both the broadcast and the music businesses. His humor had delighted radio audiences, and his voice was heard on radio and television commercials.

“My first radio job of any consequence, I drove my 1954 Mercury Monterey convertible from Sacramento, California to Pueblo, Colorado—KGHF radio. I was the morning man there. 90 bucks a week. Then Topeka, Kansas. Then rock ‘n’ roll exploded. The first novelty record I made was 1958, at WNOE in New Orleans. I was in radio until the late ’60s,” O’Shea related.

In 1970, the native Californian built Counterpart Creative Studios in Cincinnati and recorded some goofy and bizarre novelty records. Phil Ochs, the late folk singer, listed “Good-Bye Sam” in his Top 10 songs that should have been hits.

“Then ‘Convoy’ became one of the all-time monsters of novelty records (in 1975). The CB craze was going crazy.

“I was in the shower one night. My boys, Scott and Stew, were four and seven. They said, ‘Dad, you should write a record about the CBs!’ Right there, I started singing, ‘Breaker one-nine, breaker nineteen…’ The idea was coming to me. I grabbed a legal pad. The scenario was that everyone thought it was a call girl luring a bunch of truck drivers to a brothel—’Breaker one-nine, how you guys doing out there, we can handle a whole football team,’ all that.

“I called my good friend Ernie Phillips, the No. 1 promotion man in America. It was his idea that the ending be, instead of a bordello, which all the truckers thought it was, a cafe or restaurant—Ernie’s Eat-Em-Up Joint! Remember, that was CB talk. So we decided to call it ‘Colorado Call’ because back in ‘75 ‘Colorado Call Girl’ would have raised a few eyebrows. There were some names of little towns in Colorado, like Cañon City.

“I was so excited. I called the musicians the next morning, and it took us an hour to cut the track. It cost $265. My engineer was mixing it. I said, ‘I know in my heart this is a hit record.’ He said, ‘Shad, I don’t hear it.’ In those days, that’s all it took. It bummed me out completely. I gave up on it and put it in a room with some other tapes.

“Three months later, ‘Convoy’ had sold six million copies. I told someone about the record I made and never did anything with. But I played it for someone, they got excited, and I pressed 1,000 singles. Within two weeks, we had sold over 6,000 records in Ohio and Illinois on our Fraternity Records and had orders for 6,000 more. It was No. 1 in this area. We licensed it to Private Stock Records.

“But even the Chipmunks had already done a CB song. The head of a major record label said, ‘You’ve got a hit, but I think you might be too late.’ Mine would have been a No.1 record, I know that in my heart.”

“I don’t blame my engineer,” O’Shea said. “I don’t blame anybody. I’ve since gotten much thicker skin, and if I believe in something, I don’t care if everybody throws rocks at me. I go in and I do it.”