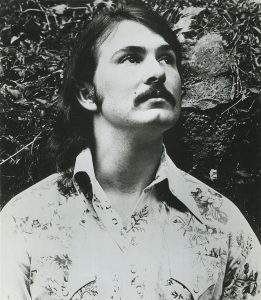 In 1970, Gram Parsons left the Flying Burrito Brothers to begin a solo career. The band continued without replacing him for four months, gigging around the West Coast as a four-piece. In late summer, Rick Roberts, a newcomer to the Los Angeles scene, was chosen to fill Parsons’ role.

“I’m a Floridian. I left college in South Carolina in July 1969 and was living in Colorado for a while. I arrived in Los Angeles on my mother’s birthday, September 14. I was telling her and everyone else I was going to L.A. to become famous. Through every step of joining the Burritos, I would get discouraged and think about going back to Colorado.”

Though they had virtually invented the blueprint for country-rock, morale of the remaining original members was low. In 1971, Bernie Leadon left to join members of Linda Ronstadt’s backing group to form the Eagles. Michael Clarke went to Hawaii, while Chris Hillman and Al Perkins left for Stephen Stills’ band Manassas. Roberts reorganized the band and finished all the Burritos’ performing commitments, including a tour of Europe.

Roberts recalled, “Gram had drug problems—he eventually OD’ed—and they parted ways on not-so-cordial terms. I was a raw rookie. Here I was given the opportunity to play with some of the people that I had grown up idolizing.”

Roberts’ stay with the Burritos was mildly profitable, very productive and an exceptionally valuable experience. He played on the final pair of albums by the group, contributing several compositions to the repertoire, including his best-known song—“Colorado,” from Last of the Red-Hot Burritos.

“I wrote that song in California. I’d been out there for four or five months. I was 19 years old. When I got to Colorado on my way out to L.A., I stopped in order to see some friends of mine, but it turned out they had moved on. I ended up coming up to Boulder looking for a place to stay for a couple of days, to catch my breath. I ended up staying for three months and fell in love with Colorado.

“When I got out to California, that song came out of that. Sitting around one night—‘Boy, I wish the hell I’d never left Colorado.’ Those were the days when the Hill was really happening. I ran into the guys in Zephyr.”

By June 1972, the group was no more. Roberts stayed with A&M Records as a solo artist.

“I made my second solo album in Colorado with Joe Walsh, a couple of Poco people, Kenny Passarelli. I made that album for $12,500.”