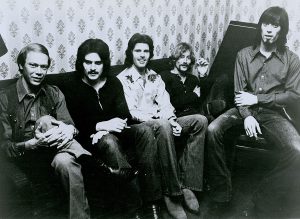 Rick Nelson was the first teen idol to use television as a way to promote records. In 1948, he joined his parents’ radio show, The Adventures of Ozzie and Harriet, which moved to television in 1952 for a 14-year run. Eight years into the show, Nelson became an “overnight success” when he released his first single, “A Teenager’s Romance”/“I’m Walking.” Television’s commercial power was unrealized at that time, and almost as an afterthought, a Ricky-sings-at-the-party sequence was aired. “A Teenager’s Romance” sold a million copies the following week.

Nelson released an endless stream of hit singles, such as “Stood Up,” “Poor Little Fool,” “Lonesome Town,” “Travelin’ Man” and “Teen Age Idol,” to name but a few. By the mid-’60s, when The Adventures of Ozzie and Harriet went off the air, his hits began to dry up and his music was eclipsed by the British Invasion.

Determined to establish an adult identity and gain the respect he deserved as a musician, Nelson put together the Stone Canyon Band with Poco bassist Randy Meisner. “The Stone Canyon Band came together almost from a negative standpoint,” Nelson said. “I didn’t know what kind of music I wanted to do. I couldn’t verbalize it, really, so I just got to thinking about how I started, the kind of music I liked. I was really fortunate in getting a unique type of style and then clicking with musicians who played along those lines. The first guy I found was Randy Meisner.” 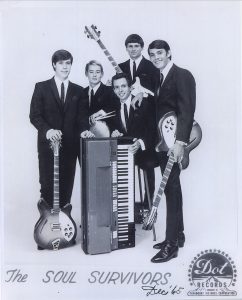 Meisner grew up on a farm near Scottsbluff, Nebraska. He traveled throughout the Midwest working the road and pursuing his musical ambitions. An affable, easygoing sort with a sweet, high voice, he cut his teeth playing with the Driving Dynamics and arrived in Denver in 1966 to play a battle of the bands. He linked up with one of the competing groups, the Soul Survivors—not the New York-based white soul group of “Expressway to Your Heart” fame, but a well-produced pop-rock act that scored two No. 1 hits on Denver’s Top 40 giant KIMN (“Can’t Stand to Be in Love with You” and “Hung Up on Losing”).

“When they lost their bass player, they asked me if I wanted to jump ship and move to Los Angeles with them,” Meisner said. The name of his new band was changed to the Poor. Meisner and lead guitarist Allen Kemp slept on the living room floor of a one-bedroom apartment in East Los Angeles for $85 a month. Gigs were few and far between. “We didn’t realize how much competition was out there,” Meisner said. “My jacket was my first pillow. We really had nothing at all.”

When Meisner took the job with Poco, the Poor broke up. With drummer Patrick Shanahan, Kemp moved to a cheaper three-bedroom house in Sherman Oaks and got a job washing cars. Meisner left Poco in a dispute over the final mixes to the country-rock group’s first album. Upon leaving the band, Meisner was contacted about working with Nelson.

Meisner contacted Kemp and Shanahan, his buddies from the band that first brought him from Denver. Nelson got the Stone Canyon Band’s name from a remote area of the Los Angeles hills he used to drive by. The sound was crisp and clear—Meisner and Kemp stacked their vocals in angelic harmonies on top of Nelson’s. Meisner quit and rejoined, then quit again to form a band with Glenn Frey and Don Henley. They hit it off so well, he decided to fly with the Eagles.

“At sound check, everybody else was looking out of the ’50s and doing just their strict old hits. Rick refused to do that. He wanted to do something different,” Kemp said. Nelson started out feeding the Garden crowd pure nostalgia, but when he sat down at the piano and performed new material, he was booed off the stage for departing from the rigid oldies program, for having long hair and for his band’s drugstore cowboy appearance.

The experience inspired Nelson to pen a song six months later featuring a mildly scornful mood and the resolute conclusion: “If memories are all I sing, I’d rather drive a truck.” “Garden Party” climbed all the way to No. 6 on the Billboard pop singles charts, one of the most extraordinary comeback hits in rock history.

Rick Nelson & the Stone Canyon Band went through several personnel changes. Allen Kemp and Pat Shanahan went on to play with the New Riders of the Purple Sage in the ’80s. Nelson died in a plane crash in 1985 at the age of 45.