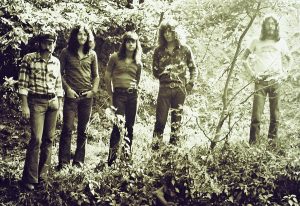 Like other Midwest bands in the 1970s, REO Speedwagon was constantly on the road, eventually becoming a regional star attraction. Lead singer Kevin Cronin and guitarist Gary Richrath wrote the classic rock staple “Ridin’ the Storm Out” in 1973 when REO played Tulagi in Boulder.

“We were kids—20 going on 15. We had a record deal, and we were goo-goo eyed,” guitarist Gary Richrath recalled. “In combination with that, we were romantics from Illinois where there are no hills—we hadn’t been far enough west to see mountains. And we freaked. We were driving across the plains saying, ‘Shit, look at that stuff!’ We were dying when we got to Boulder.

“Kevin and I were like two brothers. We did everything together at the time. We got a few provisions to go up to the Flatirons to hike around. Our tour manager said, ‘You’re not going up there’—a big blizzard was coming in. We ditched him and went anyway.”

“We ended up getting lost,” Cronin continued. “It started snowing, and we thought for a moment that we were goners.”

“It was confusing for a couple of kids from the Midwest,” Richrath said. “We got nervous and scared and walked around in circles for an hour. Then we saw a flagpole in a park and ran to it. Our road manager had brains enough to sit and wait for us. It was an inspiring moment, walking in the woods and hoping to get our asses out of there. The next morning, I woke up and said to Kevin, ‘I’ve got some lyrics. Let’s work on them.’

“Kevin always says he knows a new hit when he writes one. I didn’t quite see ‘Ridin’ the Storm Out’ becoming the stalwart REO song of the ‘70s, but now you’ve got to give the song the respect it deserves.”’

REO Speedwagon’s first million-seller was a 1977 live album titled You Get What You Pay For, and the “Ridin’ the Storm Out” single reached No. 94 on the Billboard charts. REO became America’s No. 1 rock band in 1980, reaching a zenith with a carefully crafted blend of hard rock and high-energy ballads such as “Keep on Lovin’ You” and “Can’t Fight This Feeling.”

“We weathered neglect from New York and Los Angeles music circles, critical drubbings, personnel changes and years of opening-act status,” Cronin said. “‘Ridin’ the Storm Out’ was the one thing that held the band together for all those years. It closed our shows for over a decade.”