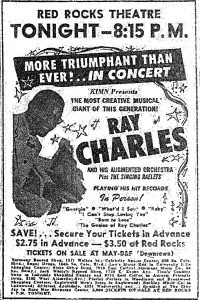 In the early years of the rock ‘n’ roll era, Denver’s untapped concert promotion business was small, informal, and up for grabs. The ill-fated August 21, 1962 Ray Charles date at Red Rocks featured a performer who had the No. 1 song in the country with “I Can’t Stop Loving You” from his ground-breaking album Modern Sounds in Country and Western Music. The year before, “Hit the Road Jack.” had also topped the charts.

The concert deteriorated into a debacle. According to Joe Salankey, director of theaters and arenas for the city, the trouble started when a few spectators began throwing beer cans at a teen who was standing and waving his arms while the Ray Charles Orchestra was playing. Some of the musicians became alarmed and got off the stage.

Charles arrived late for the show and didn’t wish to go on, but was prevailed upon by Charles Sullivan, West Coast promoter for Hugh Hooks Entertainment. Following chants of “We want Ray!,” Charles performed for 45 minutes, then ducked out. The beer cans flew once more, from high up in the amphitheatre with great velocity on the unsuspecting below. Charles’ piano was overturned. A show of force might have caused more trouble, so Sgt. George Eberle and eight other policemen hustled the drunken crowd from the theater. Eighteen people were treated for injuries.

Charles later said, “I didn’t feel I could ask the musicians to risk being exposed alone for 45 minutes. The emcee didn’t help things any. He tried to make it look like the band was responsible. What he said was wrong. It just made it worse.”