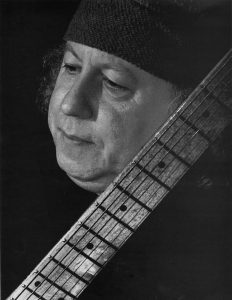 Peter Green, Fleetwood Mac co-founder and a dynamic blues-rock guitarist, died in his sleep July 25, 2020. He was 73.

In the ’70s, Fleetwood Mac’s polished brand of music made it one of rock’s most popular groups. But a decade earlier, in a vastly different form, the Mac ranked as one of the most authentic, articulate bands on the burgeoning British blues scene.

The original focal point was Peter Green, who had replaced Eric Clapton in John Mayall’s Bluesbreakers after Clapton left to join Cream. With a lean, economical lead guitar style comparable to B.B. King’s, Green soon established himself as a virtuoso.

Fleetwood Mac was an immediate success—at one time, the group was as popular as the Beatles and the Rolling Stones on its home turf—and Green wrote such classics as the haunting “Albatross,” the rollicking “Oh Well” and “The Green Manalishi.” On “Black Magic Woman,” he played a tastefully spare, exquisitely melodic solo that Carlos Santana would duplicate—nearly intact—two years later on his famous hit version.

But like Syd Barrett of Pink Floyd, Green became a drug casualty. He had come from a warm but overprotective family and had endured anti-Semitism. Under the influence of LSD, he became unstable, obsessed with religion and riddled with self-doubt about the rock life. He appeared onstage wearing crucifixes and flowing robes, and he encouraged band members to donate all their money to charities.

In 1970, Green announced his decision to leave Fleetwood Mac. He recorded a solo album and made guest appearances on other discs, but for the better part of two decades, he experienced various stages of psychological disrepair. Devotees were dependent on rumors as to his whereabouts—working as a gravedigger or a hospital orderly, it was said, or joining a kibbutz in Israel. Reports were that a disheveled, distant Green had grown his fingernails long.

A friend, guitarist Nigel Watson, started looking after Green in 1996. “He was on medication that kept him asleep—it was prescribed to keep him quiet,” Watson said. “He stopped taking that and came to live with me and my wife for nine months. I had a day job, so I’d come home and make him get up at noon, get him something to eat.”

One day as they sat in the kitchen, Green heard Watson play some tunes by famed bluesman Robert Johnson. He was moved to trim his fingernails and fumble his way back to guitar again, and the Peter Green Splinter Group was born.

The 1998 album Robert Johnson Songbook won Green a W.C. Handy award for comeback album of the year, and Hot Foot Powder, like its predecessor, was made up entirely of Johnson tunes.

Green’s band performed at the Boulder Theater in 2000. Even the briefest conversation confirmed that Green was still in an emotionally fragile state. He answered questions in a rambling mumble.

“I didn’t play for a while. That’s how you learn, putting in the time,” he said.

Such Fleetwood Mac songs as “Rattlesnake Shake” and “The Green Manalishi” showed up in Green’s live shows.

“It was a lot of uncertainty,” he said of Fleetwood Mac. “We did it slightly above working-class level. I wasn’t that good. They compared me to Eric Clapton. They shouldn’t have done that. I was a bass guitarist. We didn’t know what we wanted to do. Blues existed but we didn’t know we had to play it…I knew who I liked to hear play the blues. We didn’t think we could get anywhere.

“I knew I could do something, but I didn’t have the fingerboard that Eric did. I didn’t intend to be as good.”