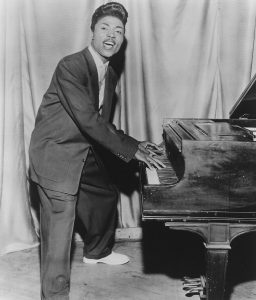 Little Richard’s 1955 hit “Tutti-Frutti” and its opening line “A-wop-lop-a-loo-bop-a-wop-bam-boom” changed the course of pop music. Rolling out his wild pounding piano style, hoarse gospel-influenced screams and hollers, and ecstatic, trilling wooo!s in his giddy falsetto, he prescribed the fundamentally hedonistic, anarchic nature of the rock ’n’ roll phenomenon like no other.

By his 60s, Little Richard was as much a personality as a musician. He made show-stopping appearances at awards ceremonies and television talk shows, where people dug his outlandish personality. In 1999, he headlined a vintage-rock show at Pepsi Center, his first Denver concert in 26 years, closing out the new arena’s grand-opening weekend.

When asked how history should view him, he didn’t hesitate.

“I am the emancipator, I am the innovator, I am the architect of rock ’n’ roll! A lot of people don’t want to give it to me, but that’s what it is,” he eagerly proclaimed.

Richard Wayne Penniman was steeped in gospel music while growing up in Macon, Georgia—“I sang so high, it was real hard for the church choir to sing with me!” He began to play the piano, and he also took note of R&B and boogie-woogie swing music popular with audiences of the era.

He won a talent contest, but early recordings didn’t receive notice. Then, working as a dishwasher in a Greyhound bus station, he met Lloyd Price when the “Lawdy Miss Clawdy” singer came through his hometown.

“He told Specialty Records about me,” Richard said. “I took them a tape. They had me come to New Orleans and meet (producer) ‘Bumps’ Blackwell. I had a song I had been doing for a long time.”

It wasn’t just Little Richard’s music that shattered the tame tempos of the Eisenhower era, though. Decked out in dazzling baggy suits, brandishing a processed sky-high pompadour, mascaraed eyes and facial makeup, Little Richard was a sight to behold. For the time, it was more than a little threatening.

“It was horrible,” he said of the fear that his flamboyance inspired. “But God brought me through it.”

At the height of his popularity in late 1957, he suddenly quit show business to learn about the Pentecostal ministry and disappeared from the rock scene. In a famous incident, he threw a valuable ring into the sea to prove that he meant what he said.

“It was a point in my life where I wanted to go to school and study religion. And I did. But I’ve never been a minister.”

Little Richard returned to rock ’n’ roll performances several years later, and over time he swung back and forth between the church and his musical career.

He nearly scored a comeback hit in 1986 with “Great Gosh A’Mighty! (It’s a Matter of Time),” the theme song from the film Down and Out in Beverly Hills. He continued to “act” in movies (“I just always be me!”). And he kept on touring.

“I want to do good while I’m doing it. Fans come out and have a good time—and see history alive!”

Little Richard hungered for that treatment.

“I’ve never had a tribute done to me. I don’t know why. I’ve seen them done on artists that are lesser known than I am. Everybody knows me—omigod, I think so! But they put my star on Hollywood Boulevard. I’m in the Rock and Roll Hall of Fame. God has been good to me.

“I never got what I should have got. But I thank God that I got what I got. It’s better late than never.”