Commander Cody, alias pianist and vocalist George Frayne, died September 26, 2021, at age 77, after a long battle with esophageal cancer. The crazy Commander was a fixture on the American music scene for most of the ’70s. His brand of good-time boogie-woogie rock ’n’ roll—notably the gonzo barroom country classic “Hot Rod Lincoln” and a breakneck reading of “Daddy, Beat Me Eight to the Bar”—endeared him to audiences throughout the world.

But Commander Cody was just another character to Frayne, a talented individual in many areas. After graduating with honors from the University of Michigan with a degree in fine arts, he discovered that the straight world held no charms for someone with diverse interests. While simultaneously trying to promote himself as an author and painter, he invented the Cody character to conquer rock ’n’ roll, but found himself pigeonholed.

In 1981, his critically acclaimed sculpture and paintings were touring the US, part of the Star Art travelling exhibition, and he stopped in Denver to promote his work. He had reemerged on record with Lose It Tonight, featuring the single “2 Triple Cheese (Side Order of Fries),” already a hit in England.

“I wrote and produced it myself, and that’s the last thing that record companies want from me,” Frayne explained in Denver. “Ever since my first record, they’ve always stuck me with a producer and it’s gotten worse, all the way up to my last album when I had two slipped discs and they slipped me some clown who didn’t know what was going on. That was Clive Davis’ deal—he met me at the Beverly Wilshire Hotel, sends up a piano, I play some boogie and he signs me with Arista Records. I figure, ‘Hey here’s a guy that believes in me.’ But he just thought he was getting a ‘name’ that he could push into the Top 10. You can’t do that with me—I won’t fit. It takes some kind of fire under these record company guys to get them going, because they don’t wanna hear from Commander Cody. They think of hicks, drunken cowboys and fiddle music. All it takes is for someone to say, ‘Hey, listen, George, you’re more than a stoned hippie that doesn’t know what he’s doing; you’re a stoned hippie that knows what he’s doing.”

Financial success wasn’t important to what Frayne was trying to accomplish. “There’s a big difference between getting what I want and getting money,” he explained. “I’ve been rich, and that’s no fun unless you can do what you wanna do. I used to get down on myself—‘Only a handful of people are digging this, what’s the problem?’ But screw trying to figure things out. That’s something I’ve learned over the last couple of years—just relax. I have no financial goals other than to pay the rent, eat regularly, and buy enough pot so I can smoke it all the time and think of songs.”

“I did pretty good with that one,” Frayne boasted. “In San Francisco, a guy went through a store’s aisles grabbing stuff whistling that song. He then punched out the owner and split. Every radio station in the Bay Area dropped the song from their playlists within a half-hour. I’ve got a lot of stuff that is not frankly controversial, but out-and-out controversial. I’ve got a nasty song about John Wayne because I don’t like John Wayne. Stuff like ‘Under that tan he was a helluva man/He tried to send me to Vietnam.’ And ‘In the end, of course/He got off on his horse.’ They don’t wanna hear that in Nashville.”

Frayne’s inspiration came in one form. “I’ve tried ’em all, and the only drug I consistently like all the time is marijuana. Cocaine is fine, but it only works if you’re drinking or vice versa. That’s good stuff on the road, that’s real rock ’n’ roll. Hey, we play these gigs in front of college kids who are drunk on their butts, and how else do you face them? Three guesses. After that, I can play a gig like Red Rocks straight—or on acid.

“With me, you really expect something different. I mean, Frank Zappa can do it because people believe in him. What’s the difference between Frank Zappa being a schmuck and a genius? It’s that a whole bunch of people think he’s a genius. If people thought I was a genius, I’d be making some funny fricking albums.”

Asked what he was planning to do next, Frayne laughed. “I’m gonna go light up a fat one.” 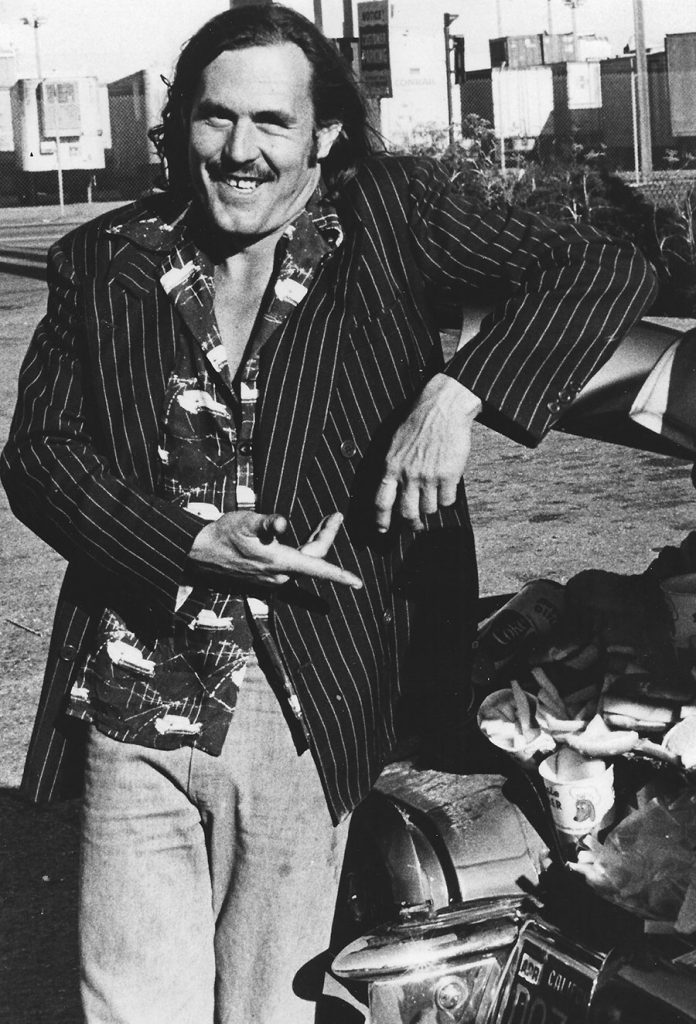