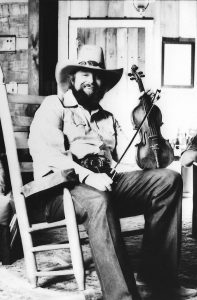 It had been a long haul from the tobacco fields and lumber mills of North Carolina, but Daniels made the leap from studio musician to the top of the charts as a Southern country rock star. He’d played sessions for Bob Dylan (including the landmark Nashville Skyline album) and cut his eyeteeth in notoriously raucous juke joints.

“I come from a real rural part of North Carolina, and I never saw a picture on a television set until I was about 15 years old—everything that happened, happened last over in that part of the country,” he explained prior to a Colorado concert at Red Rocks Amphitheater in 1979. “I used to listen to my granddaddy swap stories with my dad and my uncles and my aunts when I was a kid. When we went out coon hunting, we used to sit around fires and trade stories around back and forth—some were old stories you’d hear 15 times. I’ve heard some great storytellers in my time.”

Daniels brought his fiery fiddle to “The Devil Went Down to Georgia,” a rollicking Dixie allegory which told the tale of a fiddling contest between the Devil and a good ol’ boy named Johnny.

“Songwriting is a gift,” he shared, “and I’m good at telling a story, but I go about it a little differently. Once I get a melody, I lie in bed and run it over and over again through my mind, kind of like a tape loop in my head, coming up with different rhyming schemes and trying out combinations of words. I keep doing that until it becomes a song.”

Released on the Million Mile Reflections album, “The Devil Went Down to Georgia” made Daniels famous, soaring to the top of both the country and the pop charts at the height of disco fever. The song won a Grammy for Best Country Vocal Performance and was included on the soundtrack to the hit movie Urban Cowboy.

None of Daniels’ peers were Las Vegas kind of guys, but the mountain man headlined in a casino shortly after “The Devil Went Down to Georgia” became a hit.

“Up until then, I always thought casinos were the domain of Frank Sinatra, Tony Bennett, Sammy Davis, Jr.—people of that generation,” he noted backstage at Denver’s McNichols Arena in 1981. “But my friend Willie Nelson was asked to headline Harrah’s in Lake Tahoe for seven nights, filling in because Sinatra had cancelled. Willie could only do four nights, so he asked me to headline the other three. They sold out in advance—I had no idea we would get that kind of reception. I played in Vegas soon after that, at the Sands. There were a lot of cowboy hats there!”

Daniels continued to be active in the American West. He was inducted into the Cheyenne Frontier Days Hall of Fame in 2002 and, entering his sixth decade producing music, he wrote and recorded “It Don’t Get Better Than That,” the official theme for the Wrangler National Finals Rodeo (NFR), in 2015.

“They wanted a tune talking about cowboys and cowgirls, broncos and bulls, horses and roping,” Daniels explained. “But they said they also wanted it to mention Vegas specifically, because it’s become such a big part of the NFR (Las Vegas has hosted the rodeo since 1985). I wanted to have lyrics about qualifying for and competing at the NFR: ‘To be one of the cowboys headed to Nevada to try for the December gold/Where the lights shine bright in the clear desert night and the people come to rock and roll.’ Some of the terminology about the sights and sounds might not be understood by the general public, but rodeo fans get it.

“Proceeds are being donated to the Justin Cowboy Crisis Fund. I’ve been on the board. For many years, they’ve provided financial assistance to the guys and gals injured in professional rodeos. I’ve seen what happens with the cowboys who represent in the rough stock events—when they’ve been stepped on by a bull or something like that, they need help to mend and get their career through that rough patch.”