Phish was the left-field success story of the 1990s. One of the biggest concert draws in America, the determinedly eccentric Vermont quartet—guitarist Trey Anastasio, keyboardist Page McConnell, bass player Mike Gordon and drummer Jon Fishman—was beloved by an army of noodle-dancing, sandal-wearing, tie-dyed nomads. Since the demise of the Grateful Dead, no band had created that kind of musical and social environment.

In July 1988, Phish visited Colorado for the first time, and a nascent scene developed.

“We hadn’t played outside of New England, but a promoter in Telluride said he was going to set up a statewide tour,” McConnell said. “As it turned out, it came time to play and he’d only booked us at his club (the Roma). We played there and Aspen (Aspen Mining Company) and drove back to Vermont. But people taped the shows, and the tapes got around. When we got back to Colorado two years later, there was a bit of a buzz.”

Phish’s home base in Burlington was something of a mini-commune. “There’s a big connection between Burlington and Boulder,” McConnell said. “The same sort of people end up in the two towns. There’s the state universities, and the skiing thing. And Burlington has a little mall area just like Pearl Street in Boulder—they were designed by the same person.” 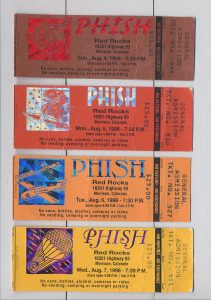 But there were growing pains. When Phish played the first of four sold-out gigs at Red Rocks Amphitheatre in August 1996, hundreds of itinerant fans from across the nation flooded the town of Morrison, looking for a “miracle”—a free ticket to the show of their dreams. Few had more than a car or campground to stay in, and the overflow packed the streets.

Despite months of planning—Phish had its own security expert—things deteriorated when a truck accidentally hit and injured a 21-year-old Phishhead. A mob formed, dancing to the beat of bongo drums and chanting at heavily armed police, who temporarily shut down the main road into town as they tried to move the gathering, estimated at more than 400, out of downtown. Bottles were thrown and a melee broke out. Several people were injured. Authorities reported 10 arrests.

McConnell looked back at the Red Rocks affair with displeasure, sorrow and acceptance.

“We didn’t hear about it until well after we got off offstage,” he explained.

“From our perspective, we understand that the nature of our crowd creates certain idiosyncrasies that most concert promoters and local authorities don’t have to deal with. We do everything we can to prepare for the numbers of people who might show up for a show with no tickets.

“In preparing for Red Rocks, we knew there was a potential situation there, and we met with all these people to make sure we were doing everything we could to make everything as smooth as possible, where our fans would be as low-impact as possible on the community. We pledged money and support to make it go as well as we could. And nobody bothered to accept it, I guess. Unfortunately, none of the preparation that we put into it was followed through.

“We can’t prevent everything all the time. And when a situation does happen, it’s a shame that it gets blown out of proportion—I saw it on CNN—because, more often than not, our fans are really peaceful, nice people and not troublemakers.”

In 2003, Phish led the trend of offering online access to live shows via the Live Phish Downloads. In addition, the band made several shows from its archives available for purchase, including 10/31/90 Armstrong Hall, Colorado Springs, an early Halloween gig.