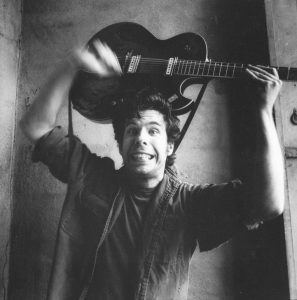 Rock eccentric Mojo Nixon parlayed an irrepressible personality, a roguish sense of humor and a fondness for lusty rockabilly into swaggering punk originals like “Elvis Is Everywhere,” “Debbie Gibson Is Pregnant with My Two-Headed Love Child,” “Don Henley Must Die” and “Stuffin’ Martha’s Muffin,” achieving a measure of national fame throughout the late 1980s.

Nixon had always been gonzo. The singer lived in Denver circa 1980-1981, when he was still appearing under his birth name Kirby McMillan. He and his punk band Zebra 123 were questioned by the U.S. Secret Service for their part in the Assassination Ball at the notorious Malfunction Junction in the Capitol Hill area.

“It took place on Nov. 22, 1980, which happened to be the anniversary of John F. Kennedy being caught in the triangulation there at the grassy knoll. Zebra 123 had been banned from everywhere. We weren’t ‘skinny-tie, New Wave’ cute, we were pissed off—three chords and a cloud of dust.

“We got together with two other bands and decided to put on our own show. This girlfriend of mine took a picture of Jimmy Carter and Ronald Reagan—the presidential election was going on then—and made it look as if they’d been shot from below and their heads were exploding, not unlike JFK’s.

“That got the Secret Service all over us. They came and gave us a big lecture, and they didn’t like our show. So there’s a file on me somewhere.”

McMillan moved to San Diego and came up with his stage name (a combination of “voodoo and bad politics”). The newly christened Mojo Nixon began performing with a partner, washboard/harmonica player Skid Roper, and quickly expanded his cult audience.