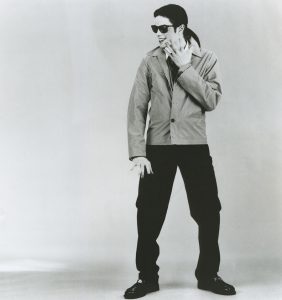 In February 1994, Denver songwriter Crystal Cartier thought she had a rock-solid case against the planet’s most famous music man. The local crooner had filed a lawsuit in federal court in Denver, claiming that she wrote “Dangerous” in 1985, and that she produced and recorded it five years later for her album Love Story: Act One—a long time before Michael Jackson released his Dangerous album in 1991. The lawsuit sought $40 million, claiming a violation of copyright and trademark laws.

The trial’s crescendo came on the seventh and final day of testimony. After Cartier—the “Queen Size Lover,” as she once billed herself—had been booted out of the courtroom by the judge for wearing fishnet stockings and a skin-tight black leather miniskirt, Jackson, the “King of Pop,” captured the attention of courtroom spectators and possibly boosted his defense by breaking into song.

A string of questions gave Jackson all the prompting he needed to deliver abbreviated a cappella renditions of his hits, ostensibly to explain how the vocal melodies were conceived on the spur of the moment “like a gift that’s put in my head.” During his 49 minutes on the witness stand, Jackson sang portions of “Billie Jean” and “Dangerous” into the court microphone. Eyes closed, head bobbing, fingers snapping, he immersed himself in brief segments of bass line and melody.

The pop superstar adamantly denied Cartier’s claim. “I wrote the words to ‘Dangerous,’” Jackson testified between samples of his songs. “No one at all” assisted with the writing, he said.

“The first time I sang the lyrics, it was kind of a funny day (in September 1990). Well, not really a funny day. I usually sing in the dark because I don’t like people looking at me unless I’m onstage…

“Then (while singing ‘Dangerous’ for the first time) this huge wall, maybe seven feet tall, fell on me.”

Jackson wore black pants and a black shirt with red and yellow epaulettes and collar tabs. He pulled his hair back in a ponytail, one strand trailing down the right side of his face. He said he didn’t read music because “you don’t have to.” He also said he had never heard of Cartier before she filed her lawsuit against him.

It took the four-man, four-woman jury less than four hours to rule that Jackson hadn’t swiped Cartier’s tune. Carter retreated to her Capitol Hill apartment, refusing to leave except for special occasions like a TV appearance on Geraldo. A cappella passages of Jackson singing “Billie Jean” and “Dangerous” on the witness stand became available via mail order through U.S. District Court at $15 a copy.

In June 2009, Jackson died as he prepared for a comeback concert tour. He was 50.