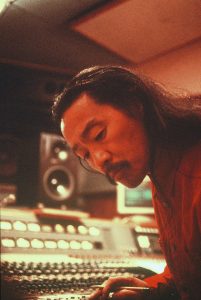 Kitaro at his Mochi House studio

Kitaro was already widely recognized throughout Asia and other parts of the world when he unified his work for worldwide distribution circa 1986. Suddenly, the American market burst open for the Japanese composer and synthesizer player. He never used “new age” to describe himself or his music, but he helped pioneer the genre, combining a thoughtful compositional style with a refined execution.

When his tour visited Boulder, Kitaro was smitten. He acquired mountaintop living quarters, a 180-acre spread in Ward, nearly 10,000 feet above sea level. He played his huge ceremonial log drums so passionately that he was heard from two miles away in Nederland.

“There is an old Japanese legend about a man who travels from his home to do something positive in another land. In turn, he will return to his home larger than life,” Kitaro said. “Japan is quiet—you never see standing ovations. But in the U.S. and Europe, the reaction is more hot. I like to feel that.”

Because Kitaro wished to “instill harmony and a peaceful co-existence, building a balance between nature and humanity,” his devotees deemed him a spiritual leader. A visitor might have expected “Camp Kitaro” to be crammed with candles, wind chimes, crystals and jewelry. But Kitaro had what locals called “Ward zen.” There was a Humvee parked next to a snowmobile in the driveway, and a few golf balls littered a makeshift driving range. “It’s a party house,” he explained.

There was no denying the serene beauty of the wildlife and pond and wind-damaged trees. In his Mochi House studio, big enough to hold a 70-piece orchestra, Kitaro recorded his projects and rehearsed with his touring band.

“Living in the mountains is nice for thinking about music,” he said. “I like to be quiet and peaceful and feel the energy from nature. I spend many hours outside, walking, and then I go back to the studio and create.”

Kitaro’s innovative soundscapes crossed over to the classical, jazz and pop charts and sold in the millions. His music for Oliver Stone’s Vietnam War film Heaven & Earth achieved the 1993 Golden Globe for Best Original Score, and 2000’s Thinking of You won the Grammy for Best New Age album in 2001.

Colorado wasn’t Kitaro’s last stop. In 2007, he moved to Sebastopol, a small city in northern California. His studio in Ward still existed and could be rented.