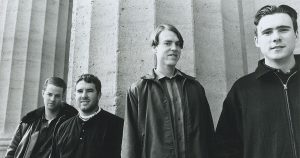 Rock critics in charge of names for musical trends reckoned Jimmy Eat World had an “emo,” or emotion-based, style, and the Arizona-based four-piece emerged as trailblazers in the genre in the late ’90s. The outfit’s influence widened considerably with the single “Lucky Denver Mint,” which used droning and ambient guitar tones and drum loops under the band’s alt-pop-rock sound.

“Lucky Denver Mint” was first released as the lead song on Jimmy Eat World’s self-titled EP. The track was added to the rotation early on KROQ, a quintessential modern rock radio station in Los Angeles. Then Capitol Records released the band’s album Clarity. The hard-edged sensitivity of “Lucky Denver Mint” was played on modern rock stations in Chicago, Phoenix, Boston and Cleveland.

But the Denver market responded slowly. KTCL ignored “Lucky Denver Mint” for weeks, and KBCO played the song only occasionally. Granted, the deeply personal lyric didn’t really play up a connection—the city was only mentioned in the first verse: “This time it’s on my own/Minutes from somewhere else/Somewhere I made a wish with Lucky Denver Mint…”

“Um, we’ve always had really good shows in Denver,” guitarist/vocalist Tom Linton added. “And there was a band from there called Christie Front Drive—we did a split 7-inch single with them.”

“Lucky Denver Mint” was featured in the movie Never Been Kissed, starring Drew Barrymore, and a companion video for the single interspersed footage from the film.

“The soundtrack was released and promoted worldwide at a time when our albums were not,” Adkins said. “Thanks to Ms. Barrymore, we got at least one of our songs across the water.”

“I used to cringe when someone asked us how it feels to play music in the emo movement,” Adkins said. “I still cringe. But people need labels.”