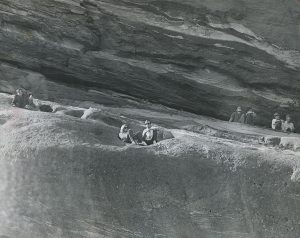 Some audience members staked out front-row seats more than twelve hours before the beginning of the concert. The arrival of Vanilla Fudge was delayed about 45 minutes because of an airline bungle, and the trucks carrying the band’s equipment had been late; Hendrix’s flight was delayed. All the while, stage announcements were made urging those people who had climbed into every nook and cranny of the rocks above the seating and stage areas not to try and “fly,” as a recent concertgoer had hallucinated on LSD and fallen. Anyone having difficulty was reminded to stay put until Rocky Mountain Rescue could help them down. Harry Tuft, the emcee, tried to keep the audience’s spirits up during the long delays.

Hendrix finally took the stage, walked to the mike and said, ‘For those of you up in the rocks…if you think you can fly, maybe we can help you along!’”

Then one of Hendrix’s Marshall amplifiers blew. There was a delay while roadies replaced tubes in the back of the amp; when that didn’t work, they swapped it out altogether. “I’m really sorry,” an upset Hendrix apologized. “I don’t know what the hell we are trying to do up here.”

By all accounts, Hendrix didn’t stack up to the competition at Red Rocks. He later said, “I had a lot of fun at Red Rocks. That was groovy and nice, ’cause people are on top of you there, or at least they can hear something. That’s where it should be, natural-theater type things.”

Noel Redding, bass player for the Jimi Hendrix Experience, said, “Unfortunately, Jimi didn’t play very well that night, and afterwards Denver had nothing to offer in after-gig entertainment. Or even daytime entertainment, for there was nothing to do the next day either, so we all took acid and went into the mountains.”

Something positive did ultimately result from Hendrix’s sole appearance at Red Rocks. After the gig, he returned to his Cosmopolitan hotel room in downtown Denver and wrote the liner notes to his Electric Ladyland album. 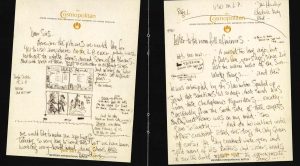