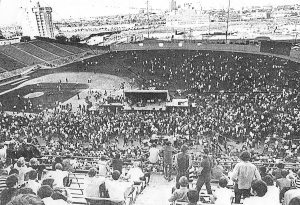 In 1969, the first and only Denver Pop Festival opened at Mile High Stadium on Friday, June 27. Woodstock didn’t happen until three months later. The three-day event featured seventeen acts, among them the Jimi Hendrix Experience, Joe Cocker, Creedence Clearwater Revival, the Mothers of Invention, Tim Buckley and Poco. Admission for each day was $6, or concertgoers could buy a three-day ticket for $15. The festival ended up with an estimated total of 60,000 admissions.

1969 was a time for drawing hard lines. Civil rights demonstrations, antiwar protests and student strikes were loose in the land, but it was the Denver Pop Festival that brought home to Coloradoans that, ready or not, the rock revolution was on.

In the late afternoon of the second day, the event changed from a musical episode to a panic. Tear gas intended for gate-crashers outside Mile High Stadium swept over the west stands, blinding and gagging many of the 21,000 fans seated inside listening to Zephyr. Violence erupted in the audience, and police moved in with clubs and more tear gas.

On the festival’s final day, the Jimi Hendrix Experience played its last concert. Rumors of an imminent split in the band had been supported by the announcement that Redding had formed his own band, Fat Mattress. At a press conference in the afternoon, Hendrix announced a new bassist, his old Army buddy Billy Cox, and a new approach: “A sky church sort of thing…I want to get the whole Buddy Miles group and call them the Freedom Express…” He added that Redding and drummer Mitch Mitchell weren’t necessarily out of the band.

During the gig, Mile High Stadium was in an uproar. The stage was located on the infield dirt, and fans were bursting forth from the stands, desperate to get close to the music. Hendrix clambered onto the stage and launched into “Bold As Love.” Meanwhile, some 2,500 kids outside the stadium lobbed beer bottles, firecrackers and rocks at police, who responded with clouds of tear gas. The battle raged for two hours, ending only when the gates were opened to allow anyone to hear the music.

“We were just finishing our set when suddenly they let tear gas off and people started to panic,” Mitchell recalled. “The road crew found us one of those two-ton panel vans, with aluminum sides and a top. The band got into the back, this huge cavernous space, and they locked us in.”

To avoid the tear gas, people immediately swarmed onto the roof of the van, which started to cave in.

“Suddenly we were very scared—we thought it was just a matter of moments before we were going to be crushed,” Mitchell said. “We only had to drive about a quarter of a mile back to the hotel, but it took us nearly an hour—and there were still people on top of the van and hanging on the sides. We really still felt like a band, no animosity—we had all linked arms and shook hands, feeling that if we were going to go, we’d all go together. But Noel did fly back to England the next day to announce that he’d left the band.”

Soon after the Denver Pop Festival, Hendrix went into virtual seclusion, and the Jimi Hendrix Experience name was no longer used. He delved further into experimentalism, recording an immense quantity of unfinished music before his sudden death in 1970. The only other full-scale album project released in his lifetime was with his all-black Band of Gypsys—Cox and drummer Miles were basically a jam-rhythm section for Hendrix.

Rock concerts in city facilities were limited to the Denver Coliseum until 1974, when the first Colorado Sun Day was staged at Mile High Stadium.