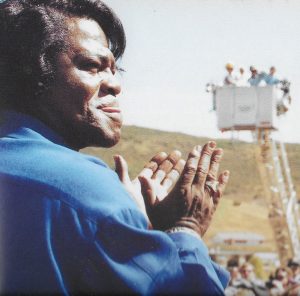 The Colorado mountain resort of Steamboat Springs had a contest to name an otherwise unnoticeable highway bridge north of town in 1993. Locals were sharply split. After much public debate and two elections that pitted factions such as longtime area ranchers against ski-bum newcomers, the residents voted and overwhelmingly selected “The James Brown Soul Center of the Universe Bridge,” in honor of the Godfather of Soul, over one of the region’s historic names.

Brown himself showed up in a stretch limousine for the official dedication, leading the crowd in an a cappella version of “I Got You (I Feel Good).” The span had already been defaced by racist graffiti, but Brown said he wasn’t bothered by the vandalism: “I hope they use the writing to teach the kids how to spell.”

Town officials wouldn’t put up a dedication plaque, saying it would only wind up on someone’s college dorm room wall.