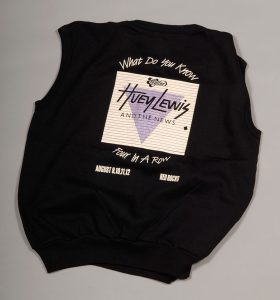 Golf served as a unique requirement for Huey Lewis, the lead singer of Huey Lewis & the News, one of the most iconic music acts of the 1980s. Lewis played golf in the mornings before concerts, and the title Fore! was ideal for the band’s fourth overall album, released in 1986. His interest golf was piqued the previous summer, when Huey Lewis & the News set a record with four consecutive sold-out shows at Red Rocks Amphitheatre.

“That was the year the PGA was at Cherry Hills,” Lewis said. “I didn’t know anything about golf at that point—I’d only played a handful of rounds. Here’s Peter Jacobsen and a few pros at our show. ‘Jake’ was compelling—he knew all of our songs. He invited me to Sunday’s final at the PGA. We went down for the hell of it, stood right there at the 18th green—it caused quite a fuss, actually. And then I got to play Cherry Hills on Monday, and I didn’t realize then what a big deal that was. But I struck up a friendship with Peter Jacobsen that has lasted to this day.”

Teaming with Jacobsen, Lewis made his debut at the AT&T Pebble Beach National Pro-Am the following year and has attended the tournaments since.