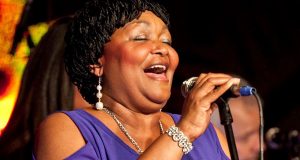 In 1984, Hazel Miller tried to move from her hometown of Louisville, Kentucky, to Los Angeles. Her rental truck broke down in Denver, so she stayed—and became a Colorado institution. Belting out blues, gospel, jazz and pop at area clubs and theaters, Miller made everyone’s socks roll up and down.

The Rocky Mountain News called her “a force of nature,” and her group repeatedly won readers’ polls as the city’s best blues/R&B band. She became a regular part of Big Head Todd & the Monsters’ lineup and frequently performed on the eTown radio broadcast heard on NPR.

Miller sang with or opened for many major artists, and she also provided entertainment to U.S. military personnel serving overseas. Her soulful voice also landed her numerous high-profile gigs. She sang for President Bill Clinton, and when she performed for Archbishop Desmond Tutu of South Africa, he reportedly exclaimed, “Please do tell me why I haven’t heard of Hazel Miller before! She’s wonderful!”

Offstage, Miller radiated an alluring combination of good cheer and fortitude. She embodied and interpreted all songs in fresh and creative ways.

“It all goes back to when I first heard Aretha Franklin sing,” she explained. “I’d say, ‘That’s her song.’ And people would go, ‘No, it’s not, it’s a Carole King song she’s singing.’ That’s when I knew—if the Queen can do it, then it must be okay!”

After raising two sons by herself, Miller turned up the heat on her career with the release of I’m Still Looking in 2000. The CD featured 11 songs, all composed by Colorado musicians.

“I actively put together something that reflects the way I think,” Miller said. “I went to all of the songwriters who live here that I like and respect and asked them for songs—because I knew they wouldn’t charge me as much!”

Chris Daniels penned the title track. “Chris is always laughing and writing down things I say—he calls them ‘Hazelisms.’ I was singing with his band the Kings at a show when some guy called out, ‘I love you, Hazel!’ I said, ‘Hold on to that thought, honey, because I’m still looking!’ A month later, Chris had this song.”

Todd Park Mohr of Big Head Todd & the Monsters wrote the throbbing, bluesy “I*C*U*N Everything” for his friend and part-time Monster. The title reflected his admiration for Prince, whose Paisley Park Studios was the recording site for BHTM’s Sister Sweetly album in 1992. And Miller believed Matthew Moon channeled a black woman from the South on “Rivers End,” given the line, “God never gives more than a soul can take…”

Miller herself came up with the smoldering “Heart to Heart,” a first for her. “I had a lot of words written down in notebooks, but I never made any of them into a song until this one,” she said with a shake of her head. “I called the love of my life and begged him to move to Denver to be with me. It didn’t work out. I sat down and wrote those words from start to finish.”

I’m Still Looking came off as a manifesto for other women at a similar point of their lives.

“Every man I’ve ever loved wanted to change me—‘I want you to quit singing,’ or ‘I want to manage you,’ or ‘I want you to do my songs.’ What do they know about my music? My mama called it a ‘slow walk.’ I’ve slow-walked to a career and a little security.”